The current flag of Montgomery County, Maryland, was adopted on October 5, 1976. It was designed by the British College of Arms. It is commonly flown outside of the Montgomery County's governmental facilities, such as fire stations.

The flag is based on the coat of arms of the Montgomery family, a scion of which, Richard Montgomery, gave the county its name. It is the county's second flag, replacing the first one, which had been in use from May 3, 1944, until its replacement in 1976. 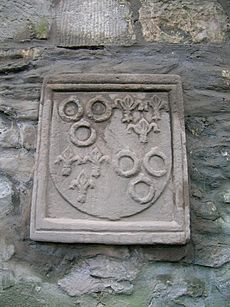 The Montgomery coat of arms after the marriage of John and Elizabeth, as carved at Eglinton Castle 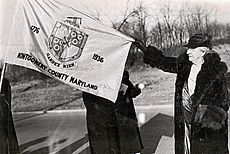 The first Montgomery County flag with its designer in 1944. 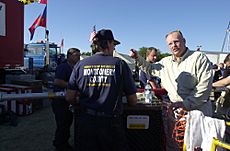 The Montgomery County flag being flown by firemen at the Pentagon after the September 11 attacks in 2001.

A former flag was used by Montgomery County from May 3, 1944 until October 1976. It was designed by Lilly Catherine Stone and featured the former Montgomery County coat of arms along on a white background, inscribed with the county's name and the date it was founded.

The fleur-de-lis in two quarters of the flag comes from the arms of the Montgomery family. The oldest known depiction of the Montgomery fleur-de-lis appears on the seal of John de Mundegumri, who lived in the late 12th century. It probably represented his French ancestry, as the family had originally come to Britain with William the Conqueror in the Norman Conquest. In 1368, the family's chief Sir John Montgomery married Elizabeth, the heiress of the Eglinton family, whose arms incorporated three rings. Their descendants combined the Montgomery fleurs-de-lis with the Eglinton rings in one quartered shield.

The indented line which separates the upper and lower quarters of the flag represent the borders of local government. The shades of red and blue are identical to those on the American flag, whereas the shade of gold is identical to that found on the Maryland state flag, denoted as PMS 124 on the Pantone Matching System scale.

According to the Montgomery County government in 1999, the flag was described as:

The following specifications are used to produce the County flag: Height to length, 2 to 3. The flag will be quartered by a crenellated line, separating the top two quarters from the two bottom quarters, and a straight vertical line, separating the left two quarters from the two right quarters. The upper left and lower right quarters shall consist of a gold fleur-de-lis on a blue background. The upper right and lower left quarters shall consist of a gold ring with a blue gem on a red background. Crenellated line formed of 11 squares, 1/11 of flag length, with center block split in middle with left side red and right side blue. Rings and fleur-de-lises to be three times as high as a block in the crenellated line with width proportional. Rings and fleur-de-lises centered horizontally on their quarters and spaced vertically so that upper and lower edge of rings and fleur-de-lises are equal distance from horizontal outside edge of quarter and nearest part of crenellated line. Red and blue should be the same shade as is used in the United States flag and gold should be same shade as is used in the Maryland State flag.

All content from Kiddle encyclopedia articles (including the article images and facts) can be freely used under Attribution-ShareAlike license, unless stated otherwise. Cite this article:
Flag of Montgomery County, Maryland Facts for Kids. Kiddle Encyclopedia.