Flag of Maryland facts for kids

The flag of the State of Maryland is the 17th-century heraldic banner of arms of Cecil, 2nd Baron Baltimore. It consists of the escutcheon (heraldic shield) of his father George, 1st Baron Baltimore (1579–1632), with the charges and fields from his coat of arms quartered with those of his grandmother, heiress of the Crossland family in the Kingdom of England. The flag was officially adopted by the General Assembly of Maryland (state legislature) in 1904.

The first Maryland flag design consisted of the Seal of Maryland on a blue background, similar to many other state flags.

The black and gold design on the flag is the coat of arms from the Calvert line. It was granted to George Calvert as a reward for his storming a fortification during a battle (the vertical bars approximate the bars of the palisade). The red and white design is the coat of arms of the Crossland line, the family of Lord Baltimore's mother, and features a cross bottony with the red and white sides of the cross alternating. Since George Calvert's mother was a heiress, he was entitled to use both coats of arms in his banner. It is one of only four U.S. state flags that does not contain the color blue (the other three being Alabama, California, and New Mexico). It is also the only US state flag to be directly based on English heraldry, although the flag of Washington, D.C. is a modification of the coat of arms of George Washington's family. 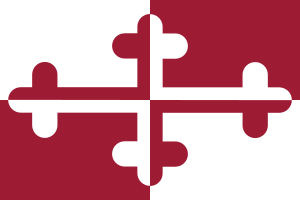 The Maryland colony was founded by Cecilius Calvert, second baron and Lord Baltimore (1605–1675), which was granted to him as George's son and heir by King Charles I, hence the use of his family's coat of arms in the flag. At first, only the gold and black Calvert arms were associated with Maryland, being reintroduced in 1854. The red and white colored arms of the Crossland family, which belonged to the family of Calvert's (Lord Baltimore's) paternal grandmother, gained popularity during the American Civil War, during which Maryland remained with the Union despite a large proportion of the citizenry's support for the Confederacy, especially in the central City of Baltimore and the counties of the southern part of the state and the Eastern Shore of the Chesapeake Bay. Those Marylanders who supported the Confederacy, many of whom fought in the Army of Northern Virginia of General Robert E. Lee, adopted the Crossland banner, which was red and white with the bottony (trefoil) cross (seen as "secession colors") and often used a metal bottony cross pinned to their gray uniforms or caps (kepis).. The black and gold (yellow) colors with the chevron design of the Calvert family were used in the flags and devices and uniform pins of the Union Army regiments in the northern Army of the Potomac.

After the war, Marylanders who had fought on either side of the conflict returned to their state in need of reconciliation. The present design, which incorporates both of the coats of arms used by George Calvert, began appearing. At first, the Crossland coat of arms was put in the upper-left corner, but this was supposedly swapped with the Union's Calvert arms because of the Union victory.

The flag in its present form was first flown on October 11, 1880, in Baltimore, at a parade marking the 150th anniversary of the founding of Baltimore (1729–1730). It also was flown on October 25, 1888, at the Gettysburg Battlefield during ceremonies dedicating monuments to the Maryland regiments of the Army of the Potomac by reorganized regiments of the former state militia, now the Maryland National Guard. However, it was not officially adopted as the state flag until 1904.

In 2001, a survey conducted by the North American Vexillological Association placed Maryland's flag fourth best in design quality out of the 72 Canadian provincial, U.S. state, and U.S. territory flags ranked.

Maryland is the only state in the union that has a specific guideline not only on how to display the flag but on what the flagpole should look like as well. In 1945, the Maryland General Assembly made a gold cross bottony the official ornament for the top of any flagpole carrying the state flag. Some time before October 10, 2007, Government House (the governor's mansion) in Annapolis ceased to display the cross bottony at the top of the flag pole, but the flags at the State House continue to do so (adhering to Maryland Code Section 13-202 and 203). All other state government buildings, including public schools, obey this guideline, but many private individuals and businesses do not.

The Calvert and Crossland coats of arms, and the flag itself, have been adapted for use in various ways across the state.

All content from Kiddle encyclopedia articles (including the article images and facts) can be freely used under Attribution-ShareAlike license, unless stated otherwise. Cite this article:
Flag of Maryland Facts for Kids. Kiddle Encyclopedia.