Flag of Nepal facts for kids 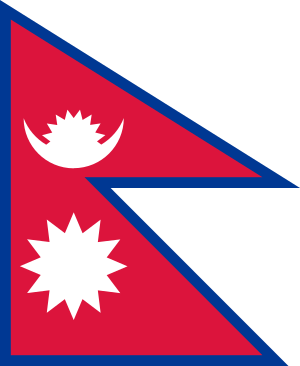 The flag of Nepal

The national flag of Nepal (Nepali: नेपालको झण्डा) was created in December 1962. It is the only non-quadrilateral national flag in the world.

It has a combination of two red pennants) with the large blue border around the unique shape of two overlapping right triangles: the smaller upper triangle bears the white stylised moon (the rising sun on the horizontal crescent moon) and the larger lower triangle displays the white twelve-pointed sun.

All content from Kiddle encyclopedia articles (including the article images and facts) can be freely used under Attribution-ShareAlike license, unless stated otherwise. Cite this article:
Flag of Nepal Facts for Kids. Kiddle Encyclopedia.