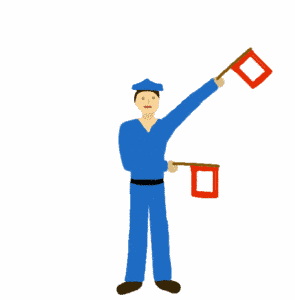 Semaphore signaling of the letter "W" at sea (red/yellow flags)

Flag semaphore is a system of spreading information at a distance by using two flags. Information is told by the positions of the flags. Each set of positions has a meaning.

Signalling uses two flags. The person signalling would often stand on a platform about 6-10ft (1.8 - 3m) above the ground. They would use a bright orange, red and white flag. This was a problem because it made it easier for the enemy to see them and shoot them. The newer system uses two short poles with square flags. The signalman holds one pole in each hand. The poles are held in one of eight possible directions. Except for in the "rest position", the flags do not cross over each other. Flags of different colours are used based on whether the signals are sent by sea or by land. At sea, the flags are coloured red and yellow. On land, they are white and blue. There is also a 'flag alphabet' which consists of many different coloured flags with different symbols on them. Japan has their own flag alphabet.

All content from Kiddle encyclopedia articles (including the article images and facts) can be freely used under Attribution-ShareAlike license, unless stated otherwise. Cite this article:
Flag semaphore Facts for Kids. Kiddle Encyclopedia.