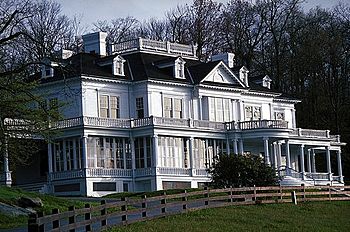 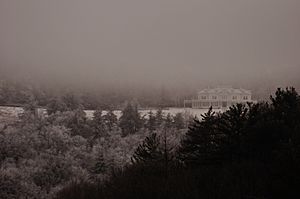 Cone Manor, as seen from Bass Lake, in heavy fog

Flat Top Manor, as it is known to the locals, is also referred to as Moses Cone Manor, Moses Cone Estate, the Moses H. Cone Mansion, or just Flat Top. On the Blue Ridge Parkway it is located at Milepost 294 in Blowing Rock, North Carolina. To most people who travel the Parkway it is simply the Parkway Craft Center, which is the major component of the manor house. It is open to the public from spring through fall and gets over 225,000 visitors annually.

The mansion was built by Moses H. Cone and his wife Bertha at the turn of the twentieth century. Its construction was started in 1899 and finished in 1901. It has twenty-three rooms and 13,000 square feet (1,200 m2) of living space.

When Moses began acquiring land in the 1890s in the Blowing Rock area to build the house, he emulated George Vanderbilt’s Biltmore Estate in Asheville, North Carolina. Newspaper reporters of the time referred to these builders as "Farmer Cone" and "Farmer Vanderbilt". In 1898 Moses announced he was going to build a mansion in Blowing Rock that cost $25,000 when $200 would buy a habitable home in the area.

The mansion is named "Flat Top" manor because of the nearness to Flat Top Mountain, which Moses and Bertha also purchased. It is part of the Blue Ridge Mountains. The elevation in this area where the house is built is just at 4,500 feet (1,400 m), while Grandfather Mountain, which is only a few miles to the south, has an elevation of nearly 6,000 feet (1,800 m). Moses used his estate to showcase his knowledge of scientific farming. It had extensive orchards, gardens and livestock. When the Blue Ridge Parkway came through and the government took over the property several buildings on the land were torn down. These included houses for workers, a building where washing took place, and a single lane bowling alley. The bowling alley was located in a small building that resembled an elongated outhouse. Only men used the bowling alley, they would roll the ball down the lane and have to walk down the lane themselves to retrieve the ball and set the pins back up. To stop the ball a large bear skin hung on the back wall. The property included several apple orchards including one on a far end of the property called China because "it was on the other side of the world."

The Moses H. Cone Memorial Park that contains the mansion is located between Milepost 292 and 295. The house is open to the public and there is no charge for admission. The first floor contains a Craft Center operated by the Southern Highland Handicraft Guild. It also has a National Park Service information desk and a book store. There are tours given by Park Rangers of the second story of the mansion. A visitor can sit in a rocking chair on the large veranda or walk the nearby self-guiding trail to the side of the manor house. The hike around Bass Lake is the most popular. The Craft Center inside the mansion features a gift shop and a craft-person's workshop where various arts and crafts (i.e. pottery, wood carving, textiles, painting, drawing, needlepoint, crocheting) are demonstrated often.

Though the manor has frequently been described as an example of Colonial Revival architecture, a professional architectural study determined that this classification is inaccurate. The architects determined that Flat Top Manor is an example of Beaux-Arts design, which was inspired by the architecture of the 1893 World's Columbian Exposition in Chicago. At the turn of the twentieth century, building the mansion with gaslights, a telephone, and central heating system was not an easy task. Building materials were hauled by horse-drawn wagons from the railhead in Lenoir, North Carolina, a distance of over 20 miles (32 km). This was the way all the fine furnishings and decorative items were brought in also to the mansion.

Moses's sisters, Dr. Claribel and Miss Etta Cone, were art collectors who used some of their family's textile fortune to amass a premier collection of modern art. Their friend Gertrude Stein once visited Flat Top Manor. The artist Henri Matisse, another friend, was sent apples as a gift from the Cones that came from the estate property. The Cone Collection, with its extensive collection of Matisse and other works, is today housed in a special wing of the Baltimore Museum of Art.

Flat Top Manor was a filming location for the movie "The Green Mile".

The Manor is featured as exterior shots in "Mandie and the Secret Tunnel" (2009) starring Dean Jones and Lexi Johnson.

All content from Kiddle encyclopedia articles (including the article images and facts) can be freely used under Attribution-ShareAlike license, unless stated otherwise. Cite this article:
Flat Top Manor Facts for Kids. Kiddle Encyclopedia.