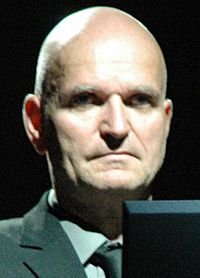 Florian Schneider-Esleben (7 April 1947 – 21 April 2020) was a German electronic pop singer and musician. He was best known as one of the founding members of the electronic band Kraftwerk. He was born in present-day Baden-Württemberg, Germany.

David Bowie named a song after Schneider in 1977. Schneider retired in 2008, but then came back in 2014 then officially retiring a year later.

All content from Kiddle encyclopedia articles (including the article images and facts) can be freely used under Attribution-ShareAlike license, unless stated otherwise. Cite this article:
Florian Schneider Facts for Kids. Kiddle Encyclopedia.