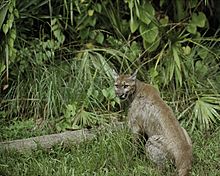 A panther in the Florida Panther National Wildlife Refuge

The 26,400-acre (107 km2) refuge was established in 1989 under the Endangered Species Act by the US Fish and Wildlife Service, to protect the endangered Florida panther, as well as other threatened plant and animal species. The Florida panther is the only cougar population found east of the Mississippi River. The refuge is part of a network of private land and government protected areas. Some of the public sections of the system are the Everglades National Park, Big Cypress National Preserve and Fakahatchee Strand State Preserve. In all, less than 100 panthers use the area, with fewer than a dozen passing through the refuge each month.

To protect the panther and other endangered inhabitants, general public use is only available at the southeast corner of the refuge, on designated hiking trails. All other areas can only be seen by way of limited tours.

The refuge is a mix of dry, upland habitat and wetlands, including pine rocklands and tropical hardwood hammocks. Among the rare flowering plants there are tropical orchids such as Cyrtopodium punctatum and Epidendrum nocturnum.

In 2005, the refuge had an 18-person staff and a fiscal year budget of $1,500,000 (with Ten Thousand Islands National Wildlife Refuge). Approximately 8,000 visitors come to the refuge each year.

All content from Kiddle encyclopedia articles (including the article images and facts) can be freely used under Attribution-ShareAlike license, unless stated otherwise. Cite this article:
Florida Panther National Wildlife Refuge Facts for Kids. Kiddle Encyclopedia.