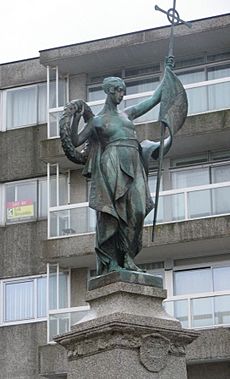 Folkestone War Memorial is in The Leas area of Folkestone, Kent. Unveiled in 1922, it commemorates the 578 men of Folkestone who served in the First World War, and those who passed through Folkestone Harbour during the war, when Folkestone Harbour railway station nearby was an important point of departure and return for passage to the Western Front via Boulogne. The road from the station to the harbour was renamed the "Road of Remembrance" after the war.

The memorial was organised by a committee chaired by Sir Stephen Penfold, who had served as mayor of Folkestone twelve times from 1888 to 1918, including four years consecutively from 1914 to 1918. He was knighted in 1915 for his service in receiving refugees from Belgian after the outbreak of the war. His son Jeffrey was killed in at the Battle of Loos on 1916.

The memorial was designed by Ferdinand Victor Blundstone. It measures 25 ft (7.6 m) high and 26 ft (7.9 m) wide and comprises a bronze statue of a woman, said to represent Motherhood and Reverence, standing on a tapering square stone pedestal with flanking stone walls, all on a stone base raised by two steps. The statue is bare-breasted, with its lower half robed. In her left hand, the figure holds aloft a cross with a union flag banner handing from its shaft, with a laurel wreath in her right hand. She faces towards the sea, and across to France beyond.

The pedestal is of Cornish granite, with the inscription picked out in gold, "MAY THEIR / DEEDS BE / HELD IN / REVERENCE". The base of the central pedestal, and the flanking walls of granite to either side, have bronze plaques. The main plaque has a low relief sculpture of ranks of soldiers moving forward, recalling the men who passed by on their way to war, with an inscription that reads: "THANKS BE TO GOD WHO GIVETH US THE VICTORY / IN EVER GRATEFUL MEMORY OF THE BRAVE MEN FROM FOLKESTONE, / AND THE MANY THOUSANDS FROM ALL PARTS OF THE EMPIRE WHO PASSED THIS SPOT ON THEIR WAY / TO FIGHT IN THE GREAT WAR (1914-1918) FOR RIGHTEOUSNESS AND FREEDOM, AND ESPECIALLY THOSE / OF THIS TOWN WHO MADE THE SUPREME SACRIFICE, AND WHOSE NAMES ARE HERE RECORDED, / THIS MEMORIAL IS HUMBLY DEDICATED." Other panels list the names of the dead from both World Wars.

The memorial was unveiled by Jacob Pleydell-Bouverie, 6th Earl of Radnor on 2 December 1922 and dedicated by the vicar of Folkestone, Peter Francis Tindall. A guard of honour was provided by the 1st battalion of the Oxfordshire and Buckinghamshire Light Infantry. Flowers were laid by the Mayor of Folkestone, by Colonel W J Dugan from Shorncliffe Army Camp, and by representatives from France, Belgium and Italy. Further commemorative plaques were added after the Second World War. The memorial is now surrounded by low railings and a wall, with gates which repeat the inscription from the memorial, "MAY THEIR / DEEDS BE / HELD IN / REVERENCE". It became a Grade II* listed building in June 2010, and was refurbished in 2018.

A new memorial arch was added nearby in 2014, unveiled by Prince Harry.

All content from Kiddle encyclopedia articles (including the article images and facts) can be freely used under Attribution-ShareAlike license, unless stated otherwise. Cite this article:
Folkestone War Memorial Facts for Kids. Kiddle Encyclopedia.