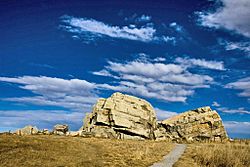 The Foothills Erratics Train is a 580 miles (930 km) long, narrow (0.62 miles (1.00 km) 13.7 miles (22.0 km) wide), linear scatter of thousands of typically angular boulders of distinctive quartzite and pebbly quartzite that lie on the surface of a generally north-south strip of the Canadian Prairies. These boulders, which are between 1 foot (0.30 m) and 135 feet (41 m) in length, are glacial erratics that lie upon a surficial blanket of Late Wisconsin glacial till. The largest glacial erratic within the Foothills Erratics Train is Big Rock.

The narrow strip of prairie covered by the Foothills Erratics Train extends along the eastern flanks of the Rocky Mountains of Alberta and northern Montana to the International Border. The boulders of the Foothills Erratics Train consist of pink and purple Lower Cambrian shallow marine quartzite and conglomeratic quartzite, that are not native to this region of Alberta. These rocks only occur within the Gog Group that is exposed in the Tonquin Valley in the Rocky Mountains of central western Alberta. Their specific source has been identified as being near Mount Edith Cavell in Jasper National Park. Lying on prairie to the east of the Rocky Mountains, the larger glacial erratics of the Foothills Erratics Train are visible for a considerable distance across the prairie and likely served as a prominent landmark for Indigenous people.

As they were transported down valley and later southward, the highly fractured boulders and other landslide debris were neither broken up into smaller blocks, rounded, nor marked with glacial striations because they were carried either on top or in the upper part of the glacier as it moved. In addition, the atypically linear string of glacial erratics that comprise the Foothills Erratics Train was created by the parallel, non-turbulent flowage of two very large ice masses—the Cordilleran Ice Sheet to the west, and the Laurentide Ice Sheet to the east—that occurred at the boundary between them. Had they been transported by either ice at the bottom of the glacier; by water; or by ice-rafting, the highly fractured boulders and other rocky debris would have been either quickly broken up into much smaller fragments, significantly rounded, widely dispersed over the landscape, or some combination of these.

All content from Kiddle encyclopedia articles (including the article images and facts) can be freely used under Attribution-ShareAlike license, unless stated otherwise. Cite this article:
Foothills Erratics Train Facts for Kids. Kiddle Encyclopedia.