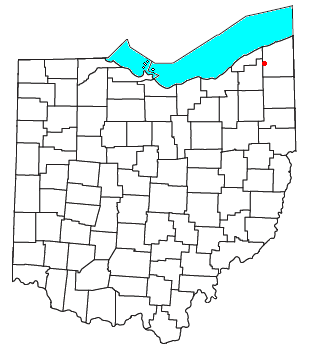 Footville is an unincorporated community in southwestern Trumbull Township, Ashtabula County, Ohio, United States. It lies at the intersection of State Route 166 with Trask Road, 1 1⁄2 miles (2.4 km) east of the Geauga County line and 11 1⁄4 miles (18.1 km) southeast of the village of Jefferson, the county seat of Ashtabula County. Spring and Trumbull Creeks, which are both tributaries of the Grand River, pass near Footville.

Footville is named for an early settler, Loren Foote, who donated land for a school and church in the community. For a time, a post office (now closed) was operated in Footville. A cemetery is located in the northeastern corner of the community. Its school, originally constructed in 1842, ceased operating when it consolidated with the Geneva school system; however, the building remains and is used for community events. A small park, which contains a playground and a memorial to veterans, is also located in the community.

All content from Kiddle encyclopedia articles (including the article images and facts) can be freely used under Attribution-ShareAlike license, unless stated otherwise. Cite this article:
Footville, Ohio Facts for Kids. Kiddle Encyclopedia.