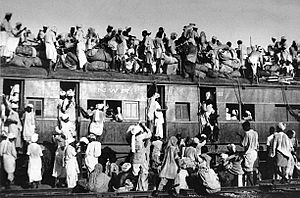 An overcrowded train carrying refugees during the partition of India in 1947. This is considered to have been the largest migration in human history. It forced millions of people to be displaced.

Forced migration (also called displacements) is when people are made to leave their home or homeland. It is usually caused by violence, persecution, danger, or because an authority (such as a government) has told people to move. People are removed either by force or because of a threat or command. A person who has become forced to migrate is called a "forced migrant" or "displaced person". They may be called a refugee, but that term has a specific legal definition.

Migration of people is constantly happening, but in a stable society it usually happens because a person chooses to do it. Forced migration occurs when people's lives, well-being or freedom is endangered. They may have little or no choice but to move. In some cases, such as human trafficking and slavery, people are physically removed from their homes.

Occasionally a government forces people and communities out of their homes or homelands for the purposes of economic development or military. It has been most often been associated with the building of dams and military bases.

Migration can also be forced by natural disasters, when people are forced to evacuate an area. This is usually temporary, and people can return to their land once it is safe.

The United Nations High Commissioner for Refugees says Afghanistan produces the most number of refugees each year. It has held that position for 32 years. Almost half of refugees are children under the age of 18. Many of these are separated from their parents.

All content from Kiddle encyclopedia articles (including the article images and facts) can be freely used under Attribution-ShareAlike license, unless stated otherwise. Cite this article:
Forced migration Facts for Kids. Kiddle Encyclopedia.