Fort Crockett is a government reservation on Galveston Island overlooking the Gulf of Mexico originally built as a defense installation to protect the city and harbor of Galveston and to secure the entrance to Galveston Bay, thus protecting the commercial and industrial ports of Galveston and Houston and the extensive oil refineries in the bay area. The facility is now managed by the US NOAA National Marine Fisheries Service, and hosts the Bureau of Commercial Fisheries Laboratory, the Texas Institute of Oceanography, as well as some university facilities. The area still contains several historical buildings and military fortifications.

A military facility of the US Army Coast Artillery Corps on Galveston Island was established in the late 1890s. Construction got underway just in time to be disrupted by the Great Galveston Hurricane of 1900. The United States Army Corps of Engineers spent several years rebuilding and expanding the reservation before it was re-garrisoned. In 1903, the facility was named Fort Crockett in honor of David Crockett, US Congressman from Tennessee and famous Texas hero of the Battle of the Alamo. Following extensive repairs and upgrades, the fort was garrisoned by the US Army. 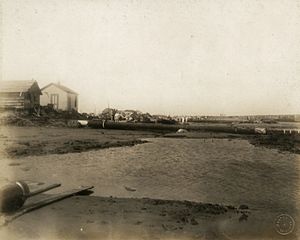 During the First World War, Fort Crockett served as a US Army artillery training center. Troops bound for France were trained in the use of several types of artillery.

During the 1920s and early 1930s, Fort Crockett housed the United States Army Air Corps' (USAAC) 3rd Attack Group (an ancestor to USAF's 3rd Wing). At this time, the 3rd Attack Group was the only USAAC group devoted solely to attack aircraft. In 1932, Fort Crocket received eleven A-8 Shrike attack aircraft, the US military's very first all-metal monowing combat aircraft this delivery constituted the first delivery of this aircraft to a forward operational unit. After 1934, the 3rd Attack group was relocated to Barksdale, Louisiana.

During the Second World War, Fort Crockett was expanded with an additional large gun battery, and focus was placed on defense against German U-boats. Additionally, the fort served as a German POW camp.

Following the war, Fort Crockett served for several years as an army recreational center. In addition to the attractions on the base itself (tennis, golf, etc.), the city of Galveston was a major tourist destination with a variety of attractions, thus making the location ideal.

In the 1950s, Fort Crockett became home for fisheries research for the US Fish and Wildlife Service.

Due to the massive amount of concrete used in constructing the protective casemate for the guns and magazines, Battery Hoskins proved uneconomical to remove. The abandoned casemates remained an unofficial tourist attraction for decades. In the early 1980s, a luxury resort (the San Luis Resort) was built on and behind the battery. The massive concrete gun emplacements remain dramatically visible from the seawall highway that runs along Galveston Beach, even though one gun emplacement now sports a swimming pool atop it, and the other gun emplacement is adorned with a wedding gazebo.

During the Texas Revolution, Galveston harbor and the entrance to Galveston Bay was secured by a small fortification located at the north east side of Galveston Island, which corresponds to the west side of Bolivar Roads, the entrance to the bay. This was originally named Fort Travis in honor of William Barret Travis, the commanding officer of the Alamo.

In the late 19th century, the entrance to Galveston Bay was secured by two new fortifications, one on each side of the mouth of the bay, as the Coast Defenses of Galveston (Harbor Defenses (HD) after 1924). The "Fort Travis" name was transferred across Bolivar Roads to a new fortification on Point Bolivar, the tip of the Bolivar Peninsula, which forms the east side of the entrance to the bay. An additional new fortification was built on the north east tip of Galveston Island, and was named Fort San Jacinto in honor of the final battle of the Texas Revolution, which established Texas' independence from Mexico. 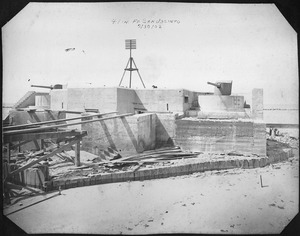 All content from Kiddle encyclopedia articles (including the article images and facts) can be freely used under Attribution-ShareAlike license, unless stated otherwise. Cite this article:
Fort Crockett Facts for Kids. Kiddle Encyclopedia.