Kids Encyclopedia Facts
This page is about historic Fort in Canada. For the defence force of the Gibraltar, see British Forces Gibraltar.

Fort Gibraltar was founded in 1809 by Alexander Macdonell of Greenfield of the North West Company in present-day Manitoba, Canada. It was located at the confluence of the Red and Assiniboine rivers in or near the area now known as The Forks in the city of Winnipeg. Fort Gibraltar was renamed Fort Garry after the merger of North West Company and the Hudson's Bay Company in 1821. 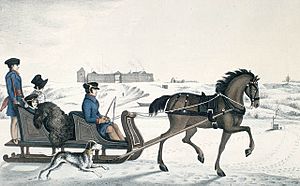 Governor of Red River, Andrew Bulger, driving his family on the frozen Red River in a horse cariole with the fort now renamed Fort Garry in the background (winter of 1822-23)

In the early 19th century fur-trading was the main industry of Western Canada. Two companies had an intense competition over the trade. The first, the Hudson's Bay Company, was a London, England-based organization. The second, the North West Company, was based in Montreal. Hudson's Bay Company was distinctly English in its culture and flavour while the North West Company was a mix of French, Scottish and First Nations cultures.

The voyageurs of the North West Company were a highly mobile group of fur traders. They established temporary encampments in the forks region that later became Winnipeg.

In 1809 the North West Company built Fort Gibraltar. About half a mile north the Selkirk settlers and HBC employees built Fort Douglas which was started in 1813 and completed in 1815. There were many conflicts between the mostly Scottish employees of the HBC and the NWC employees, who were mostly French-Canadians and Métis.(see Pemmican War)

On March 17, 1816, Fort Gibraltar was captured and destroyed by Robert Semple, new Governor of the Red River Colony. The action was ruled illegal by British authorities and the North West Company was given permission to rebuild the fort in 1817.

On March 26, 1821, The North West Company was merged with its rival under the name of the Hudson's Bay Company.

A reconstructed Fort Gibraltar located in Whittier Park in St. Boniface, Winnipeg was built in the late 1970s for the Festival du Voyageur, the largest winter festival in Western Canada. In the summer, the museum operates living history demonstrations of life in the fur trading post as in 1815. Fort Gibraltar is currently located in Whittier Park at 866 St Joseph Street.

All content from Kiddle encyclopedia articles (including the article images and facts) can be freely used under Attribution-ShareAlike license, unless stated otherwise. Cite this article:
Fort Gibraltar Facts for Kids. Kiddle Encyclopedia.