Fort Lyon was composed of two 19th-century military fort complexes in southeastern Colorado. The initial fort, also called Fort Wise, operated from 1860 to 1867. After a flood in 1866, a new fort was built near Las Animas, Colorado, which operated as a military post until 1897.

It has been used as a United States Army fort, a sanatorium, a neuropsychiatry facility, and a minimum security prison. The state closed the prison in 2011, and in early 2013 proposed to use the site as a rehabilitation center for homeless people. Then in late 2013 it became a rehabilitative transitional housing facility. This is run by the Colorado Coalition for the Homeless and has been a developing program to the present day.

The fort is listed on the National Register of Historic Places. Part of the site, the Fort Lyon National Cemetery, which began burials in 1907, remains open. 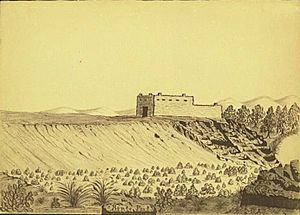 In July 1860, the Army rented Bent's New Fort and used it for storage of annuity goods for the Cheyenne and Arapaho. Annuity goods were provided by treaties in exchange for reduced access to ancestral land, such as hunting grounds. Barracks were built around the fort and additional defensive features were added, like diamond-shaped gun emplacements on newly-erected earthenworks that surrounded the fort.

It was first named Fort Flaunteroy. Shortly after, it was named Fort Wise for Henry A. Wise, the governor of Virginia. After the start of the American Civil War and Virginia's succession from the Union, it was finally named Fort Lyon in 1862 for Brigadier General Nathaniel Lyon, who had died in battle.

In 1861, the Treaty of Fort Wise was signed at the fort. The goal, which was short-lived, was to ensure peace between settlers and the Cheyenne and Arapaho people. Old Fort Lyon was the staging post used by Colonel John Chivington in 1864 as he led an attack on friendly Cheyenne and Arapaho camps that became known as the Sand Creek massacre. To prevent word spreading of the impending attack, Chivington had guards posted at the fort to prevent people and mail from reaching Sand Creek.

In 1866 after flooding on the Arkansas River, the U.S. Army established a new fort near Las Animas. The facility was completed in 1867. The site was abandoned after the Army relocated.

In 1867, a new fort called Fort Lyon was built near the present-day town of Las Animas, Colorado. The U.S. Army used Fort Lyon until 1897, when they abandoned it after the end of the Indian Wars.

In 1906, the U.S. Navy opened a sanatorium there to treat sailors and marines with tuberculosis. The dry climate and rest by isolation at the fort were thought to be beneficial by contemporary treatment methods. On 22 June 1922, the Veteran's Bureau assumed operations. In 1930, administration of the hospital was transferred to the newly created Veterans Administration. Within three years, the VA designated Fort Lyon a neuropsychiatry facility. In 2001 the hospital was closed and the facility was turned over to the state of Colorado for conversion to a minimum security prison. The prison was closed in 2011.

In September 2013, Governor John Hickenlooper announced that Fort Lyon had reopened as an isolated transitional housing facility for homeless people operated by the Colorado Coalition for the Homeless. As of November 2018, there were over 200 clients there.

All content from Kiddle encyclopedia articles (including the article images and facts) can be freely used under Attribution-ShareAlike license, unless stated otherwise. Cite this article:
Fort Lyon Facts for Kids. Kiddle Encyclopedia.