Kids Encyclopedia Facts
Not to be confused with Las Animas County, Colorado.

Las Animas is the Statutory City that is the county seat and the only incorporated municipality in Bent County, Colorado, United States. The city population was 2,410 at the 2010 United States Census. Las Animas is located in southeast Colorado east of Pueblo, near the historic Bent's Fort.

Las Animas is located on the Arkansas River, just west of its confluence with the Purgatoire River (or "Purgatory River").

A famous legend says that the town and the Purgatoire River were named for a group of conquistadors, probably part of Coronado's expedition, who died without the last rites sacrament of a priest. According to Catholic belief, their souls would go to Purgatory as a result. The original Spanish name for Las Animas ("The Souls," in Spanish) was purported to be La Ciudad de Las Animas Perdidos en Purgatorio, "The city of lost souls in Purgatory."

According to the book Trinidad, Colorado Territory by Morris F. Taylor, this explanation is not consistent with Spanish Catholic belief. Souls in purgatory are not lost; they are in limbo for a short time of purification before ascending to heaven. According to Taylor, the French developed the connotation of souls in Purgatory.

The Spanish version, El Rio de las Animas Perdidas en Purgatorio, was considered an embellishment of the French version. No 19th-century map shows this full Spanish name or any translation of it. Existing maps have different names for the river: Rio de Las Animas, Purgatory River, and "Picatoire", a corruption of Purgatoire (which today is anglicized as Picketwire). French fur traders of the 19th century referred to the river as the Purgatoire. Another anglicization was Pick of Ware.

Water is a central issue in Las Animas. Like many cities in southeastern Colorado, Las Animas competes with wealthier cities on the Front Range for the water to sustain life and the local agricultural economy. Developers and municipalities have capitalized upon drought and low crop prices by buying water from desperate farmers. As this water is diverted upstream to serve the larger cities, Las Animas loses access to this important resource.

Because of the poor quality of the city's water supply, a reverse-osmosis filtration plant was installed in the mid-1990s. The loss of minerals in the water resulted in the collapse of many water mains, which had been supported by mineral deposits that formed on the insides of the pipes. 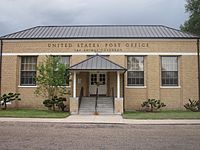 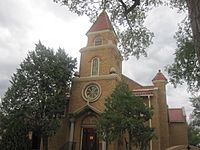 There were 1,091 households out of which 31.0% had children under the age of 18 living with them, 46.0% were married couples living together, 14.8% had a female householder with no husband present, and 34.3% were non-families. 30.7% of all households were made up of individuals and 14.6% had someone living alone who was 65 years of age or older. The average household size was 2.46 and the average family size was 3.04.

Las Animas sits along the Mountain Branch of the Santa Fe Trail and served as the major city in southeast Colorado until the Atchison, Topeka and Santa Fe Railroad established operations in La Junta, 20 miles (32 km) to the west of Las Animas.

Las Animas celebrates an annual Santa Fe Trail Day, a celebration of the pioneers and traders who used this trail. This local holiday is the oldest student council-sponsored event in the US. The Las Animas High School Student Council organizes the day, with assistance from the Bent County Chamber of Commerce. Festivities have included a parade, a costume contest, square dancing, a demolition derby, and a traditional "Ranchburger" lunch, as well as many other activities. In past years, students have spread out events over a two-day period, sometimes making this a weekend event. The event occurs on the last Friday in April.

On April 24, 2009, Las Animas celebrated its 75th Annual Santa Fe Trail Day with events throughout the weekend. Past Santa Fe Trail Day Queen Royalty, dating to the 1940s, were invited, as well as Student Council Presidents since 1944.

All content from Kiddle encyclopedia articles (including the article images and facts) can be freely used under Attribution-ShareAlike license, unless stated otherwise. Cite this article:
Las Animas, Colorado Facts for Kids. Kiddle Encyclopedia.