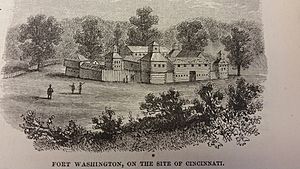 Fort Washington was a fort in the early history of Cincinnati, Ohio. The location is marked by a plaque at the Guilford School building, at 421 E 4th St, Cincinnati, which now occupies the site. The physical location of the fort was facing the mouth of the Licking River, above present day Fort Washington Way.

In 1789, Fort Washington was built to protect early settlements located in the Northwest Territory. The fort was located within modern-day Downtown Cincinnati and was used to protect settlers of that city in its early years. Gen. Josiah Harmar described it as "one of the most solid substantial wooden fortresses. . .of any in the Western Territory." The stockade's walls were two stories high with blockhouses located at each corner. The fort was named in honor of President George Washington. 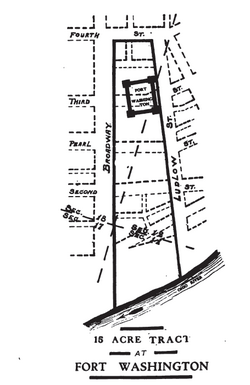 Fort Washington provided military protection for the surrounding territories. Gen. Arthur St. Clair was appointed governor of the Northwest Territory by vote of Congress on October 5, 1787; he filled the office until November 22, 1802. When Governor St. Clair arrived at Losantiville [Cincinnati] the settlement consisted of two small hewed log houses and several cabins. Maj. Doughty, under orders from Gen. Josiah Harmar, was engaged with a small military force in finishing the construction of Fort Washington. The population of the rude village, exclusive of the military, probably did not exceed one hundred and fifty. Three days after Gen. Harmar took up his quarters at Fort Washington, on January 1, 1790, Governor St. Clair was received with due ceremony by the troops and citizens of Losantiville.

In 1790, Harmar used Fort Washington to launch an expedition against Native Americans in northwest Ohio, especially the Miami Indians, whose principal city was Kekionga (modern-day Fort Wayne, Indiana). The fort was used as a staging point and to supply all the northern forts. The fort would serve similar purposes for the remainder of the 1790s until the United States military moved its operation to the Newport Barracks.

On October 22, 1790, Gen. Harmar's army was ambushed and soundly defeated by Indians led by Chief Little Turtle. The Indians of the Ohio Territory were in open revolt aided by the British. Indian raids came close to Cincinnati, despite the presence of the nearby Fort Washington. On June 1, 1791, John Van Cleve, a blacksmith of Fort Washington was killed by the Indians in an outlot of Cincinnati (near the present site of Music Hall).

General "Mad" Anthony Wayne was appointed Commander-in-Chief of the United States Army by President George Washington to subdue the Indians in the Northwest Territory. Wayne began at once to reorganize the army. In July 1792 he began training his men at Fort Lafayette at Pittsburgh, Pennsylvania. He then moved his forces to his purpose-built training center at Legionville (the United States Army's first basic training facility) during the winter 1792–93. In the summer of 1793, Wayne moved his forces down the Ohio River by barge to Fort Washington and waited for orders to attack.

Washington was still trying to resolve problems through negotiation. He also established other Posts, a camp, Greenville, Ohio, in honor of his friend, Nathanael Greene, and another fort, Fort Recovery. After fighting for some time a treaty of peace was signed, on August 3, 1795, known as the Treaty of Greenville.

In 1803 the smaller Fort Washington was replaced by the Newport Barracks. It was opened just across the Ohio River in Newport, Kentucky. James Taylor Jr. an influential resident of Newport, Kentucky, had lobbied his cousin James Madison to place the post in Newport.

When George Washington issued a patent for sale of 248,250 acres to Judge John Cleves Symmes, known as Symmes Purchase, on September 30, 1794, it reserved 15 acres to the federal government for the fort.

On February 28, 1806, Congress directed the Secretary of the Treasury to cause the site of the abandoned fort to be surveyed and laid off into lots, streets and avenues conforming to the plan of the city, and to sell the lots to the highest bidders at a sale at the Cincinnati Land Office. The survey, certified July 8, 1807, shows the fort’s boundaries to be Fourth Street to the north, Ludlow Street to the east, the Ohio River to the south, and Broadway to the west.

In October 1952, excavators discovered the remnants of Fort Washington's gunpowder magazine under the northeast corner of Broadway and Third streets, at the site at which Western & Southern Life Insurance Company's parking garage was to be constructed. Researchers with the Historical and Philosophical Society of Ohio first visited the site on October 13, 1952.

The fort's name is retained in Fort Washington Way, a section of Interstate 71 and U.S. Route 50 that runs through downtown Cincinnati and passes just in front of the former fort. The highway was given this name in 1958 upon a suggestion from the Cincinnati Times-Star editorial board and with the support of the state's Anthony Wayne Parkway Board, the Cincinnati Enquirer editorial board, and William T. Buckner, whose great-grandfather William Henry Harrison once served at the fort.

All content from Kiddle encyclopedia articles (including the article images and facts) can be freely used under Attribution-ShareAlike license, unless stated otherwise. Cite this article:
Fort Washington (Cincinnati, Ohio) Facts for Kids. Kiddle Encyclopedia.