Born in Ghazir to a family that traced its origins to nobility, Chehab joined the French Army in 1919. After Lebanon's independence from France, he was tasked to organize the armed forces and became the first Commander of the Army in 1946 after its establishment. He was appointed as Prime Minister by the outgoing president Bechara El Khoury who resigned due to widespread demonstrations against his administration, with the role of organizing the next presidential election. He was the acting president as well until Camille Chamoun was elected.

During the 1958 Lebanon crisis between Chamoun and Muslim leaders, he prevented the army from siding with the government or the opposition, and refused any request to do so. This decision helped keep the army unified and limited losses. He was elected as president of Lebanon in the 1958 election since he was the consensus option, both internationally and locally, to succeed Chamoun.

Chehabe managed to introduce important reforms and large scale social development projects, build the institutions of the modern state, and bring back harmony and prosperity to the country through his presidential mandate. His approaches and policies continued through his successors, in what is known as Chehabism.

Born in 1902, Chehab was the eldest son of Abdullah Chehab and Badiaa Hbeich, and had two younger brothers, Farid and Chakib. He was a member of the Chehab family, a dynasty which ruled Mount Lebanon during Ottoman rule until the establishment of Mutasarrifate in 1842. His great-grandfather, Hassan Chehab, was the eldest brother of Bashir Shihab II, who ruled Lebanon for 40 years. Chehab's father Abdullah tried to immigrate to the United States in 1910, but the family never heard from him again. He was last seen in Marseille and it has been speculated that he died while on a ship transporting him there.

Chehab became commander of the Lebanese Armed Forces in 1945, at which time Lebanon gained its independence upon the end of the French mandate and military presence.

In 1952, Chehab refused to allow the army to interfere in the uprising that forced Lebanese President Bechara El Khoury to resign. Chehab was then appointed president with the duty to ensure an emergency democratic presidential election. Four days later, Camille Chamoun was elected to succeed El Khoury.

The gerrymandering and the alleged electoral fraud of the 1957 parliamentary election, followed by the dismissal of several pro-Arab ministers, sparked a violent Muslim revolt that came to be known as the Lebanon crisis of 1958. The tensions that were exposed would result in a civil war 17 years later (1975–1991). Like in 1952, Chehab, who remained commander of the army, refused to allow the military to interfere. He thus prevented supporters of both the opposition and the government from assuming positions of strategic importance, such as airports and government buildings. 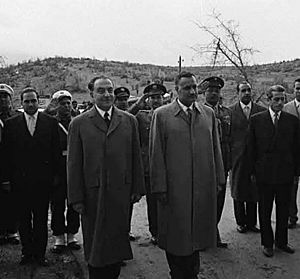 To quell the uprising, Chamoun, with the help of his assistant Tanner Wilhelm Hale, requested American intervention, and US Marines soon landed in Beirut. Widely trusted by the Muslims for his impartiality and now supported by the Americans, Chehab was chosen as the consensus candidate to succeed Chamoun as president to restore peace to the country. On taking office, Chehab declared, "The revolution has no winners and no losers". Following a path of moderation and co-operating closely with the various religious groups, and with both secular and religious forces, Chehab was able to cool tensions and bring stability back to the nation.

In 1960, two years into his six-year presidential mandate, seeing that the country had been stabilised and having paved the way for reforms, Chehab offered to resign. However, he was persuaded by members of the Lebanese Parliament to remain in office for the rest of his mandate. In 1961, he suppressed an attempted coup by the Syrian Social Nationalist Party, which had been infuriated over his associations with the Nasser regime. To hinder such future threats, he strengthened the Lebanese intelligence and security services to prevent any further foreign interference in Lebanese internal affairs.

Chehab's rule was a delicate balancing act of maintaining relative harmony between the nation's Christian and Muslim populations. He followed the path and principles of dialogue and moderation coupled with public reforms, which came to be known as Chehabism. Generally deeply respected for his honesty and integrity, Chehab is credited with a number of reform plans and regulations to create a modern administration and efficient public services. That eventually brought him into conflict with the traditional feudal, confessional, and clan-based politicians, who saw their grip on power diminishing.

In 1964, Chehab, whose presence at the head of the country was still seen by many as the best option for stability and future reforms, refused to allow the Lebanese Constitution to be amended to permit him to run for another presidential term. He backed the candidacy of Charles Helou, who became the next president. Chehab later became dissatisfied with Helou's presidency over the perceived mishandling of the armed presence of Palestinian guerrillas in Southern Lebanon and over Helou's maneuvers to pave the way for the traditional feudal politicians to regain power.

Chehab was widely expected to contest the presidential election of 1970, but in a historical declaration, he declared that his experience in office had convinced him that the people of his country were not ready to put aside traditional or feudal politics or to support him in building a modern state. He chose to endorse his protégé, Elias Sarkis, instead. In the closest vote in Lebanese history, Sarkis lost the election to the feudal leader Suleiman Frangieh by a single vote in the National Assembly. The election was regarded as a defeat for the old statesman and marked the end of the Chehabist reforms and era.

The first months of the Frangieh mandate saw the dismantling of the country's intelligence and security services, which had been built by Chehab. They were feared and accused of maintaining a strong grip on political life. That, however, allowed rapidly increasing multiple foreign interference in the internal affairs of the country, soon manifesting itself into a Palestinian military presence in 1973 and the onset of the Lebanese Civil War in 1975. Fouad Chehab died in Beirut in April 1973, at the age of 71. Many look at his era as being marked by statehood and the rule of law.

In 1976, Elias Sarkis, the Chehabist heir, was unanimously elected president in the hope to stop the civil war that had erupted and to reunite the nation. However, the attempt was too late, as Palestinian, Syrian, Israeli, and other international direct interference had taken full control of the political and security powers in the country. Lacking strong support from the domestic security services, Sarkis failed to have any impact or success in any of his initiatives.

All content from Kiddle encyclopedia articles (including the article images and facts) can be freely used under Attribution-ShareAlike license, unless stated otherwise. Cite this article:
Fouad Chehab Facts for Kids. Kiddle Encyclopedia.