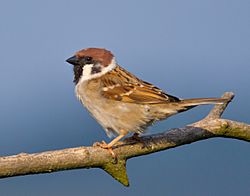 The Eurasian tree sparrow was the most notable target of the campaign.

The Four Pests Campaign (Chinese: 除四害; pinyin: Chú Sì Hài) was one of the campaigns of China, agains four pests: namely rats, flies, mosquitoes and sparrows. It was part of a campaign called the Great Leap Forward, which wanted to boost Chinese economy, in the mid-20th century. The campaign started in 1958.

The extermination of sparrows is also known as Smash Sparrows Campaign (Chinese: 打麻雀运动; pinyin: Dǎ Máquè Yùndòng) or Eliminate Sparrows Campaign (Chinese: 消灭麻雀运动; pinyin: Xiāomiè Máquè Yùndòng). It caused severe ecological imbalance; it was one of the causes of the Great Chinese Famine. In 1960. Mao Zedong ended the campaign against sparrows and redirected the fourth focus to bed bugs. Only after Mao Zedong had died, in 1976, did the official Chinese press agency announce that sparrows were more useful than harmful. The government took measures to increase the sparrow population in the province of Shandong.

All content from Kiddle encyclopedia articles (including the article images and facts) can be freely used under Attribution-ShareAlike license, unless stated otherwise. Cite this article:
Four pests campaign Facts for Kids. Kiddle Encyclopedia.