Kids Encyclopedia Facts
Not to be confused with Fowler, Michigan. 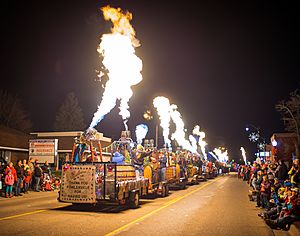 Fowlerville is a village in Livingston County in the U.S. state of Michigan. It is located in the northeast portion of Handy Township, but is politically independent from the township. The population was 2,886 at the 2010 census.

Fowlerville is home to several notable events such as Christmas in the 'Ville, Memorial Day observances, and a 4 July parade.

The first permanent settler was Ralph Fowler in 1836, who also instructed Amos Adams to plat the village in 1849. A post office named "Cedar" was established in 1838, but was renamed "Fowlerville" in 1853, after the village's plat name. The village incorporated in 1871.

Charlie Gehringer, the baseball Hall of Famer, was from Fowlerville.

The village is the site of the Livingston County Fair Grounds, where various large events are held annually (e.g. big name concerts, the county fair, Horse racing, "Biker Fest"). There are also annual festivities in the town during the year celebrating different national holiday such as Christmas, Fourth of July, and Memorial Day.

The Fowlerville Chronicles, self-published in 2010 by Marion Cornett, follows the history of Fowlerville from the arrival of Ralph Fowler in 1836 through 2010. There are nearly 600 pictures, maps, aerials, and sketches. A copy of the book can be found on The Fowlerville Observer, a website dedicated to reporting the history of the village as well as modern-day events. Another feature on the website are "squint shots"—a picture is shown each day of something in and/or around the village of Fowlerville.

All content from Kiddle encyclopedia articles (including the article images and facts) can be freely used under Attribution-ShareAlike license, unless stated otherwise. Cite this article:
Fowlerville, Michigan Facts for Kids. Kiddle Encyclopedia.