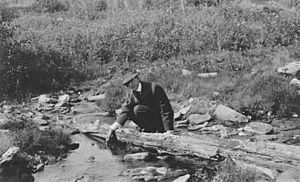 Carpenter was born in Mansfield, Ohio, son of George F. and Jennette L. Carpenter. He graduated with a bachelor's degree from University of Wooster in 1877. He began working as a journalist for the Cleveland Leader in 1879, and in 1882 he moved to Washington DC as the correspondent there. He married Joanna D. Condict of Mansfield in 1883. In 1884 he became a correspondent for the American Press Association. In 1887 he worked for the New York World. By this point his writings were being widely syndicated to other newspapers and magazines around the USA.

Carpenter collected enough assignments with newspaper syndicates and Cosmopolitan Magazine to pay for a trip around the world in 1888-1889. He was charged with sending a "letter" each week to twelve periodicals, describing life in the countries to which he traveled. He continued to travel extensively, logging 25,000 miles in South America in 1898, and later doing letter-writing tours of Central America, South America, and Europe. From the mid 1890s until he died, Carpenter traveled almost continuously around the world, authoring nearly 40 books and many magazine articles about his travels. His travels and writings were so extensive historians have trouble placing his exact whereabouts at any given time, though his books speak to where he went.

His writings include personal memoirs and what he called 'geographical readers' for use in geography classes. These would remain standard texts used in American schools for forty years. His writings helped popularize cultural anthropology and geography. He has been noted for his 1922 study of the regeneration of Europe after WWI, and the first granted interview with Chinese statesman Li Hung Chang.

He traveled with his wife, and while not traveling they stayed in Washington, D.C., or at their home near the Shenandoah Valley in the summers. He had two children. His real estate holdings in Washington made him a millionaire. He was a Fellow of the Royal Geographical Society, the National Press Club, and numerous scientific societies.

Carpenter died of sickness in 1924 while in Nanking, China, on his third round the world trip. The Boston Globe obituary observed he "always wrote fascinatingly, always in a language the common man and woman could understand, always of subjects even children are interested in. [He] had a genius for finding out things, and the things that interest everyone, and then for writing them interestingly." 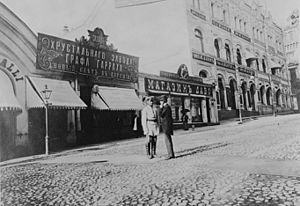 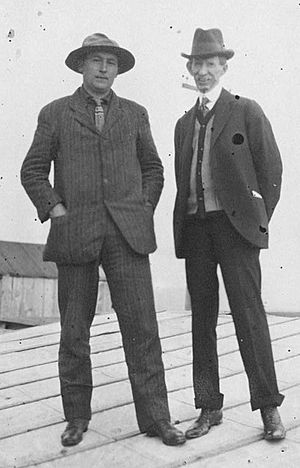 All content from Kiddle encyclopedia articles (including the article images and facts) can be freely used under Attribution-ShareAlike license, unless stated otherwise. Cite this article:
Frank G. Carpenter Facts for Kids. Kiddle Encyclopedia.