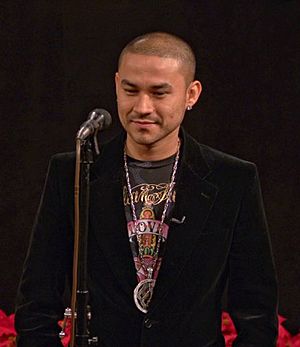 Frankie J (born on February 16 1980 in Baja, California, USA) is an American singer-songwriter. Frankie J had first appeared on A.B. Quintanilla III's band "Kumbia Kings". He later left the band to become a solo artist. His debut album What's a Man to Do was released on May 27, 2003. In 2005, Frankie J released his third studio album The One and debuted at number three on the Billboard 200 chart. It had sold 130,000 copies in one week. It was then certified platinum by the RIAA for shipments of 1 million copies.

All content from Kiddle encyclopedia articles (including the article images and facts) can be freely used under Attribution-ShareAlike license, unless stated otherwise. Cite this article:
Frankie J Facts for Kids. Kiddle Encyclopedia.