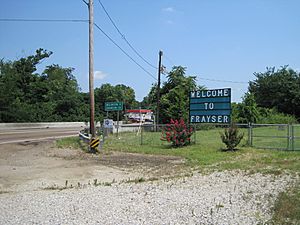 Frayser is a community in North Memphis, Tennessee, United States.

Frayser is the western tip of a peninsula created by the Loosahatchie and Wolf Rivers as they converge into the Mississippi River just north of Downtown Memphis. Mud Island is the peninsula's southwest tip. Because it is situated between the 3rd and 6th of the Mississippi River's Chickasaw Bluffs, early settlers called it "The Point."

In 1818 the territory bounded by the Ohio River on the north, the Tennessee River on the east, and the Mississippi River on the west was purchased from the Indians. Andrew Jackson represented US government at the transaction and the new territory became known as The Jackson Purchase and what is now Western Tennessee and Western Kentucky.

Much of the land now known as Frayser was given to a Mr. Hendron for his services in the North Carolina State Militia during the Revolutionary War. In 1822, Anderson B. Carr, Dr. Frank Rice and J.C. McLemore purchased 5,000 acres (20 km2) here.

One of the earliest settlers was a Mr. Cousins, who came from southern England just prior to the Civil War. He established his home in the area and, using slave labor, had many beautiful terraces carved out of the face of the hill behind the old Harvester Plant. Mr. Cousins opened one of the first country stores in the area on the Randolph Road off N. Second St. He also operated a cotton gin on the place.

In 1858 Reverend Davidson, a circuit-riding Methodist minister, began a four church circuit through North Shelby County. He legally described his Frayser stop as “Under the giant Oak tree on Point Church Road,” which then was a path through farmland with thousands of Oak trees. Accounts of early services indicate lots of singing, shouting and praying in an interdenominational congregation. The old church cemetery located in the 3900 block of Overton Crossing has gravestones dated 1878.

After several years of meetings outdoors, a small wood chapel was built. Called The Point Chapel, it was located near what is now the southwest corner of the Southwest Tennessee Community College Gill Center.

In 1869, tracks of the Paducah & Memphis Railroad were laid from Memphis to Covington as part of the Chesapeake, Ohio & Southwestern Railroad. In 1873 a reporter described his trip to Covington by rail. He told of “wild looking, heavily timbered country” north of the Wolf River. He added, “there were a few highly cultivated farms with tasteful improvements but, what was usually seen from the train were little clearings as in some wild western country....not a single well worked field of corn or cotton was seen on either side.”

The old C.O. & S tracks, which now go through a deep ravine cut by the I.C.R.R. once climbed a hill at “Gooseneck Bend” so steep that push engines were used to make the grade.

On September 19, 1877 a Post Office was established on the Paducah & Memphis line. At that time The Point was very sparsely populated with a combination of small farms and summer estates owned by rich Memphians. Dr. J. R. Frayser, a prominent old Memphis physician, was one of many wealthy Memphians who invested in property along the new railroad to the north and built a summer home to use as a haven when fever epidemics struck Memphis. His land was at the intersection of roads leading to Big Creek (Millington Rd.) and Raleigh (Whitney-Dellwood), across from the small railroad depot that become known as Frayser Station.

The arrival of the railroad through The Point brought immigration. An Italian vegetable farmer named Dallosta settled on The Point and began sponsored other farming immigrant families from his home in northern Italy. By 1900, Frayser Station had become a predominantly Italian community.

In 1889, the C.O. & S. railroad line was purchased by the Illinois Central system. At that time the ICRR connected Chicago with Fulton, KY. The ICRR added lines going to New Orleans and changed its name to the I.C. Gulf R.R. For years the passenger train through Frayser was called the Fulton Accommodation.

Frayser Station was not the depot on The Point. A railroad stop two miles (3 km) farther north was named for Squire Ben Felt, a prominent resident who helped form The Point Church, and a third was located at Overton, on the south side of the Loosahatchie River. Another community east of Frayser Station, above the Hindman Ferry, became a futuristic subdivision called Rugby Hills Estates. The area north of Rugby Hills was called Ardmore.

With the automobile came the demise of passenger traffic on the railroad. The railroad depots were closed and over the years the station part of the name was dropped. Today, the entire western tip of what was The Point is simply known as Frayser. Frayser developed in the mid twentieth century as an industrial, working class suburb due to its proximity to the industrial area of Memphis, including a large International Harvester plant.

On January 1, 1958 the City of Memphis annexed the community.

Frayser has long been home to the working class Americans. However, as factories in the area began to close, the population of Frayser began to markedly dwindle in the 1970s and 1980s, and it stands at 51,068 today. With a large majority of its residents earning incomes below the poverty line, only 6% holding college degrees, and a continued lack of business and industrial investment, the neighborhood is now one of the most economically depressed and highest crime-rated areas of Memphis.

Most of the population of the ZIP code 38127, which has some rural areas and extends to Shelby Forest, is concentrated in Frayser.

Percentage of married-couple families (among all households): Here: 25.2% Memphis: 29.9%

Percentage of married-couple families with children (among all households): Frayser: 8.5% Memphis: 15.7%

Percentage of single-mother households (among all households): Frayser: 28.6% Memphis: 19.8%

Percentage of people that speak English not well or not at all: Frayser: 1.0% Memphis: 2.6%

All content from Kiddle encyclopedia articles (including the article images and facts) can be freely used under Attribution-ShareAlike license, unless stated otherwise. Cite this article:
Frayser, Memphis Facts for Kids. Kiddle Encyclopedia.