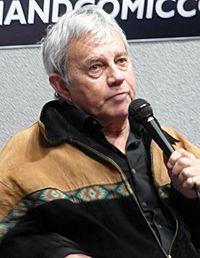 Frazer Hines (born 22 September 1944) is an English actor. He is best known for his roles as Jamie McCrimmon in Doctor Who and Joe Sugden in Emmerdale. Hines appeared in 117 episodes of the original series of Doctor Who; only the first four Doctors appeared in more episodes. He was born in Horsforth, West Riding of Yorkshire.

All content from Kiddle encyclopedia articles (including the article images and facts) can be freely used under Attribution-ShareAlike license, unless stated otherwise. Cite this article:
Frazer Hines Facts for Kids. Kiddle Encyclopedia.