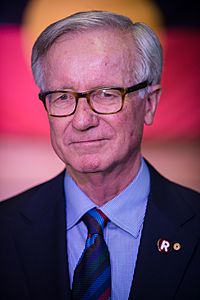 Frederick Michael Chaney AO (born 28 October 1941) is an Australian politician. He was deputy leader of the Liberal Party from 1989 to 1990. He was a Senator for Western Australia from 1974 to 1990. After serving this role, he was a member of the House of Representatives for Pearce from 1990 to 1993.

Chaney was born in Perth, Western Australia. He was the son of Liberal politician Sir Fred Chaney. His six siblings include businessman Michael Chaney and judge John Chaney. In 1964, he married Angela Clifton. The couple have three children.

All content from Kiddle encyclopedia articles (including the article images and facts) can be freely used under Attribution-ShareAlike license, unless stated otherwise. Cite this article:
Fred Chaney Facts for Kids. Kiddle Encyclopedia.