Freedom is a borough in Beaver County, Pennsylvania, United States, located along the Ohio River 25 miles (40 km) northwest of Pittsburgh. In the early years of the twentieth century, chief industries included the production of oil, caskets, and monuments. Today, Freedom is considered a northern suburb of Greater Pittsburgh. The population was 1,569 at the 2010 census.

In 1824, the Harmony Society returned to Pennsylvania, from Indiana. The society settled in what is now Ambridge, Pennsylvania, five miles (8 km) up the Ohio River. One of the reasons the society left Indiana was because of harassment for their abolitionist activities. Their settlement was in Beaver County along the Ohio River. There they founded "Ökonomie," now better known as Old Economy Village. Here the Society gained worldwide recognition for its religious devotion and economic prosperity.

The Harmonites were abolitionists, and began placing signs along the Ohio River with one word, "FREEDOM".

The area of present-day Freedom, Pennsylvania, began to be called "Freedom" on maps of the Ohio River used by the steamboat navigators. 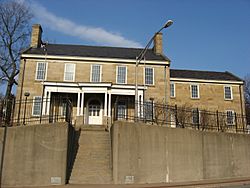 The community of Freedom was founded in 1832 by Jonathan Betz and Stephen Phillips, co-owners of a steamboat building business. They purchased about 100 acres (0.40 km2) of land for $2,000.00 from General Abner Lacock. The original village was surveyed and plotted by Simon Meredith. All of the lots, streets and alleys were located with special preference to the steam-boat building business, the only business at the time. Later, an additional 39 acres (160,000 m2) were purchased from Captain William Vicary for $2,500.00. Vicary himself retained some property in the area, including a stone house; today, the house remains a local landmark, and is listed on the National Register of Historic Places.

About 150 people first located in Freedom and it grew rapidly. The town was laid out on a Tuesday and by the following Saturday, fourteen houses had been built.

In 1833, Freedom contained 40 dwellings, 47 families, and about 320 people. Boat building and distilling were its two main businesses.

By 1837, Freedom had grown to a population of about 600, and 100 dwellings. New businesses included a foundry, and steam engines manufactured by J. Baker and Company, a large steam sawmill, and an extensive distillery and gristmill owned by J. Stahl and Company. The merchants at that time were: Phillips and McConnell, Stile and Fisher, Phillip Bentel, John Donnan, J. W. Mead, three innkeepers: Samuel Furnier, J. W. Snead, and Thomas G. Kerr and two physicians: Drs. William Smith and T. F. Robinson.

In 1896, the borough of Saint Clair joined with Freedom Borough as Greater Freedom. Saint Clair Borough was located in what is currently Freedom's second ward. It was laid out by Captain William Vicary and was often called Vicary or Vicary Extension.

There were 687 households, out of which 32.6% had children under the age of 18 living with them, 44.0% were married couples living together, 18.5% had a female householder with no husband present, and 31.6% were non-families. 26.9% of all households were made up of individuals, and 10.3% had someone living alone who was 65 years of age or older. The average household size was 2.56 and the average family size was 3.09.

All content from Kiddle encyclopedia articles (including the article images and facts) can be freely used under Attribution-ShareAlike license, unless stated otherwise. Cite this article:
Freedom, Pennsylvania Facts for Kids. Kiddle Encyclopedia.