Freelandville is an unincorporated census-designated place in Widner Township, Knox County, Indiana, United States. Freelandville is located around the intersection of State Roads 58 and 159.

The first settler of the area was John Widner who came to Knox County in 1798 and in 1804 settled on land two and a half miles northwest of Freelandville. William Polk, uncle of James Polk, settled on land about 2 miles from Widner in 1808. In 1812, Fort Widner was built as protection against the Native Americans during the second war with Great Britain.

Although the area was initially settled by the English, cheap available government land and the aspect of work on the Wabash & Erie Canal brought other immigrants to the area. Freelandville was settled mostly by immigrants from Germany, many from the province of Prussia, in the mid-1800s. The German settlers originally referred to the place as Bethlehem or Kreuzweg, meaning "crossroads". The town was not officially laid out until July 31, 1866, when done so by John Ritterskamp. Residents chose to name the town Freelandsville to honor John F. Freeland, who was a prominent citizen and a local physician.

Kixmiller's Store was added to the National Register of Historic Places in 1978. 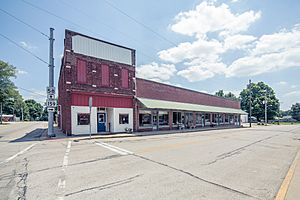 Stone marker at the location of the Freelandville School

The first school taught in the area was in 1808, at the home of John Widner. The first school building in Freelandville was built around 1850, before the town was laid out. Due to the rapidly expanding population, a second two-story building was built in 1874.

In 1963, the area high schools were consolidated into the North Knox School Corporation. This consolidated all local schools into a central location in Edwardsport. This included the high schools of Bicknell, Freelandville, Bruceville, Oaktown, Edwardsport, Sandborn, Westphalia, and Emison. The grade schools remained at their locations, with the exception of Edwardsport, whose students were transferred to Freelandville.

The Freelandville School teams were known as the Fightin' Dutch and the school colors were blue & white.

Freelandville has the inclusion of a well-known street called ‘Happy Street’. When Freelandville was originally surveyed by John Ritterskamp, he named the street Henry Street after a member of his family as he did many of the streets.

Eventually the residents started referring to it as ‘Happy Street’ due to the friendly people and children living there. It is unknown as to when the nickname started, but it is believed to have been called ‘Happy Street’ since at least the 1930s.

In the early 1980s, the Freelandville Improvement Club decided to put street signs up in town, as they had not had them before then. Oddly enough, there is no current street sign for Happy Street, as anytime one was put up, it was stolen.

The residents of Henry street decided to petition to have the name legally changed to ‘Happy Street’, which it was. Happy Street runs for only one block, until it crosses State Road 159, then it becomes Henry Street.

All content from Kiddle encyclopedia articles (including the article images and facts) can be freely used under Attribution-ShareAlike license, unless stated otherwise. Cite this article:
Freelandville, Indiana Facts for Kids. Kiddle Encyclopedia.