The song was originally designed as a Cab Calloway-style big band number. After Robin Williams was cast, it was retooled as a more comedic, pop-culture-filled song.

ScreenCrush stated that remnants of the previous version of the film can be seen in this sequence:

Aladdin's original design was younger, more cartoony, and loosely based on actor Michael J. Fox. But Jeffrey Katzenberg wanted the design changed, fearing that Aladdin wasn't a suitable leading man for the beautiful Jasmine. So Aladdin's design was reworked to be less Michael J. Fox and more Tom Cruise. However, animation on the movie had already started, so you can see traces of the old Aladdin design during "Friend Like Me". 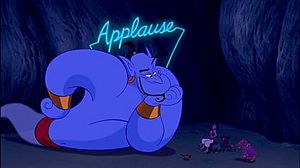 The Genie is a supernatural character – and as such, he often uses anachronisms, such as the neon "Applause" sign at the end of this musical number, as well as various other references to famous media that would have been created centuries after the time period in which Aladdin is set.

After Aladdin releases the Genie from his lamp and the Genie considers that he can give Aladdin almost anything within a limit of three wishes, the Genie proves his nigh-omnipotent power to the skeptical thief with an impressive musical number, stressing that he is a friend unlike any other. This song is similar to the use of contemporary references in "Be Our Guest", performed by the enchanted cutlery of Beauty and the Beast, and "A Guy Like You", performed by the Gargoyles in The Hunchback of Notre Dame. The same happens in the live-action remake. The only difference is that Genie didn't ask for the name of Aladdin before the song. This affects the lyrics of the song such as: "Mr. man what's your name?" instead of "Mr. Aladdin, sir."

All content from Kiddle encyclopedia articles (including the article images and facts) can be freely used under Attribution-ShareAlike license, unless stated otherwise. Cite this article:
Friend Like Me Facts for Kids. Kiddle Encyclopedia.