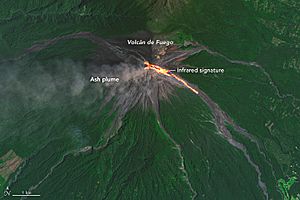 Satellite image of a lava flow on Volcán de Fuego, 2016

Fuego volcano - Volcán de Fuego or Chi'gag ("Volcano of Fire") - is an active stratovolcano in Guatemala. It sits about 16 kilometres (9.9 mi) west of Antigua Guatemala, one of Guatemala’s most famous cities and a tourist destination. It has erupted frequently since the Spanish conquest. Fuego recently erupted on 3 June, 2018.

"Fuego" is famous for being almost constantly active at a low level. Small gas and ash eruptions occur every 15 to 20 minutes, but larger eruptions are rare. On 9 August 2007 Fuego erupted spewing lava, rock and ash. Guatemala's volcanology service reported that seven families were evacuated from their homes near the volcano.

The volcano is joined with Acatenango and collectively the complex is known as La Horqueta. A new round of activity began on 19 May 2012, with lava flows and ejections of ash, and has continued into January 2016.

In 1881, French writer Eugenio Dussaussay climbed the volcano, then practically unexplored. First, he needed to ask for permission to climb from the Sacatepéquez governor, who gave him a letter for the Alotenango mayor asking for his assistance with guides to help the explorer and his companion, Tadeo Trabanino. They wanted to climb the central peak, unexplored at the time, but could not find a guide and had to climb to the active cone, which had a recent eruption in 1880. 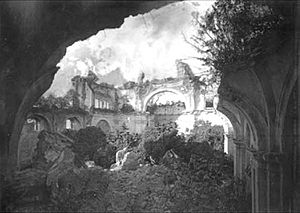 Ruins of the Society of Jesus church interior in 1880.

The strongest earthquakes experienced by the city of Santiago de los Caballeros before its final move in 1776 were the San Miguel earthquakes in 1717. In the city, people also believed that the proximity of the Volcán de Fuego (English: Volcano of Fire) was the cause of earthquakes; the great architect Diego de Porres even said that all the earthquakes were caused by volcano explosions.

On 27 August there was a strong eruption of Volcán de Fuego, which lasted until 30 August; the residents of the city asked for help to Santo Cristo of the Cathedral and to the Virgen del Socorro who were sworn patrons of the Volcan de Fuego. On 29 August a Virgen del Rosario procession took to the streets after a century without leaving her temple, and there were many more holy processions until 29 September, the day of San Miguel. Early afternoon earthquakes were minor, but at about 7:00 pm there was a strong earthquake that forced residents to leave their homes; tremors and rumblings followed until four o'clock. The neighbors took to the streets and loudly confessed their sins, bracing for the worst.

The San Miguel earthquake damaged the city considerably, to the point that some rooms and walls of the Royal Palace were destroyed. There was also a partial abandonment of the city, food shortages, lack of manpower and extensive damage to the city infrastructure; not to mention numerous dead and injured. These earthquakes made the authorities consider moving to a new city less prone to seismic activity. City residents strongly oppose the move, and even took to the Royal Palace in protest; in the end, the city did not move, but the number of elements in the Army Battalion to safeguard the order was considerable. The damage to the palace were repaired by Diego de Porres, who finished repairs in 1720; although there are indications that there were more jobs done by Porres until 1736.

In 1773, the Santa Marta earthquakes destroyed much of the town, which led to the third change in location for the city. The Spanish Crown ordered, in 1776, the removal of the capital to a safer location, the Valley of the Shrine, where Guatemala City, the modern capital of Guatemala, now stands. This new city did not retain its old name and was christened Nueva Guatemala de la Asunción (New Guatemala of the Assumption), and its patron saint is Our Lady of the Assumption. The badly damaged city of Santiago de los Caballeros was ordered abandoned, although not everyone left, and was thereafter referred to as la Antigua Guatemala (the Old Guatemala).

All content from Kiddle encyclopedia articles (including the article images and facts) can be freely used under Attribution-ShareAlike license, unless stated otherwise. Cite this article:
Fuego volcano Facts for Kids. Kiddle Encyclopedia.