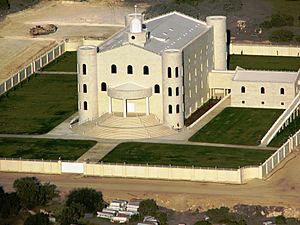 The Temple of the Church, in Eldorado

It is believed the church had about 10,000 members in 2009. These live in the sister cities of Hildale, Utah and Colorado City, Arizona; as well as Eldorado, Texas; Westcliffe, Colorado; Mancos, Colorado; Creston and Bountiful, British Columbia; and Pringle, South Dakota.

All content from Kiddle encyclopedia articles (including the article images and facts) can be freely used under Attribution-ShareAlike license, unless stated otherwise. Cite this article:
Fundamentalist Church of Jesus Christ of Latter Day Saints Facts for Kids. Kiddle Encyclopedia.