Fyfield Down facts for kids

Fyfield Down is part of the Marlborough Downs, about 1.5 miles (2.4 km) north of the village of Fyfield, Wiltshire. The down is a 325.3 hectare biological and geological Site of Special Scientific Interest, notified in 1951. The down has the best assemblage of sarsen stones in England, known as the Grey Wethers.

The site is to be distinguished from another Fyfield Down also in Wiltshire, east of Pewsey and on the edge of Salisbury Plain, near another place called Fyfield. The two places are only about 9 miles (14 km) apart.

The down has the best assemblage of sarsen stones in England. The stones are known here as the Grey Wethers, for their likeness to sheep when seen from a distance. They were noted by Col. Richard Symonds in his diary for 1644: "They call that place the Grey-wethers, because a far off they looke like a flock of sheepe." They support a nationally important lichen flora. An alternative name for this natural rock feature is Mother's Jam.

On the west side of the down is a recumbent sarsen stone with grooved markings. It is thought to be a prehistoric grinding bench for shaping, whetting, and polishing stone axe-heads, and is similar to other Neolithic and Bronze Age examples in France. 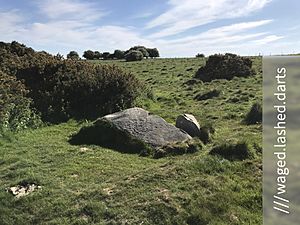 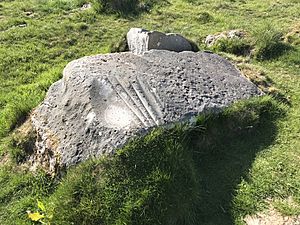 The Polisher close up

To the east is a prehistoric dolmen known as The Devil's Den . It is the remains of a neolithic passage grave which was reconstructed in 1921.

All content from Kiddle encyclopedia articles (including the article images and facts) can be freely used under Attribution-ShareAlike license, unless stated otherwise. Cite this article:
Fyfield Down Facts for Kids. Kiddle Encyclopedia.