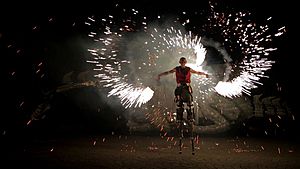 The Galway International Arts Festival (GIAF), founded in 1978, is a cultural organisation which produces an annual arts festival in Galway, Ireland. It also produces new work that tour nationally and internationally, in addition to presenting the discussion forum, "First Thought Talks". The festival maintains non-profit status and insists that at least 25% of the festival programme is free for the public.

Originally The Galway Arts Festival, the organisation was founded in 1978 by University College Galway's Arts Society in collaboration with community activists of Galway Arts Group. The first festival was described in local papers as "Galway Arts Society's Week of Craic". Their original budget was €1000 of Arts Council Funding and most of the artistic events were staged in an arts centre that now homes Sheridan's Cheesemongers.

The name was changed in 2014, to Galway International Arts Festival, to emphasize the diversity of contributors to the festival. "The festival presents and produces work in Galway which sits side by side with the work of artists and companies from around the world," Artistic Director Paul Fahy explained.[tone] "Both are local and global; both are international." The name change also facilitated the vision of the festival as a producing body, creating works that tour internationally.

The festival takes place in Galway for two weeks in late July. It presents and produces programmes across theatre, music, visual arts, opera, street spectacle, dance, discussion and comedy. The 2018 festival set records for attendance, breaking a quarter million for the first time, representing a 20% increase over the participants in the 2017 festival. Over 600 artists created and took part in over 200 events across the festival. This 41st festival also featured a new Festival Garden in Eyre Square, offering pop-up performances and local food stands. The Festival Garden attracted more than 145,000 people. Visitors to the 2017 festival were estimated to be 45% from Galway, 18% around the rest of Ireland, and 37% outside of Ireland.

The organization has produced or co-produced more than 20 productions which have toured to London, New York, Edinburgh, Chicago, Adelaide, Sydney, Hong Kong and Washington. These include four exhibition commissions. GIAF has also fostered a relationship with Landmark Productions, a Dublin-based production company. Together they have produced multiple works written by or directed by Irish playwright Enda Walsh that have toured internationally. 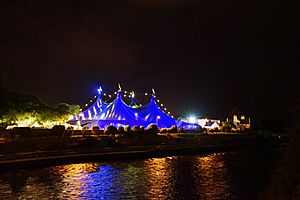 View of the Big Top at night 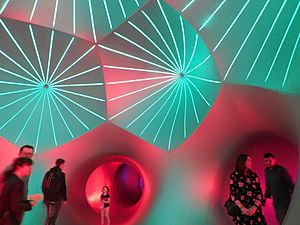 From inside Architects of Air's walk-in sculpture 'Miracoco Luminarium,' designed by Alan Parkinson and on display in Eyre Square during the 2018 festival.

In 2018, GIAF announced a new Internship programme in the visual arts to train 25 participants to be able to engage with patrons in the galleries in an in-depth way.[tone]

Irish playwright Enda Walsh has featured in past GIAF line-ups. His first play, "Disco Pigs", which was also Cillian Murphy's first stage role, debuted in the 1997 festival. Walsh has since gone on to work with the festival to also produce works ranging from operas to experimental staged 'Rooms.' His 2014 Ballyturk won Best Production at the Irish Times Theatre Awards and his 2011 Misterman toured to New York City and was the New York Times Critics' Choice for eighteen days in a row.

Starting in 2012, GIAF hosted a series of talks each festival that revolve around a theme. The 2018 festival's First Thought Talks about 'Home' was opened by President Michael D. Higgins and followed up by 43 other scholars, artists, scientists, and athletes, both Irish and International. The majority of these talks are recorded and can be accessed online. They are also live-streamed on Facebook.

All content from Kiddle encyclopedia articles (including the article images and facts) can be freely used under Attribution-ShareAlike license, unless stated otherwise. Cite this article:
Galway International Arts Festival Facts for Kids. Kiddle Encyclopedia.