In computer graphics and photography, the gamut, or color gamut is a certain subset of colors. Most often it is a subset of colors, which can be accurately represented by some output device.

Another sense refers to the complete set of colors found within an image.

The term gamut was adopted from music, where in middle age Latin "gamut" meant the entire range of musical notes of which musical melodies are composed. In the 1850s, the term was used for a range of colors or hue, for example by Thomas De Quincey, who wrote "Porphyry, I have heard, runs through as large a gamut of hues as marble."

In color theory, the gamut of a device is the portion of the color space that it can show.

When certain colors cannot be presented within a particular color model, those colors are said to be out of gamut.

While processing a digital image, an image is usually recorded in RGB color model. When printing such image has to be converted from an original RGB color space to the printer's CMYK color space. During this process, the colors, which are out of printer's gamut are converted to to the in-gamut colors. So, the final image is an approximation of the original one. 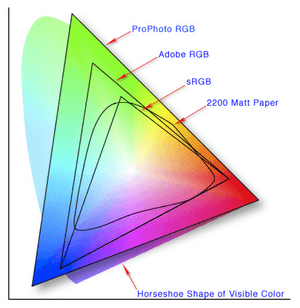 A comparison of the colors enclosed by some color spaces.

Gamuts are commonly represented as areas in the full visible range of colors. The full range of colors is usually shown as CIE 1931 chromaticity diagram shaped like a horseshoe.

The gamut depends on the brightness. So a full gamut is represented in 3D space.

Comparison of gamut of some devices

All content from Kiddle encyclopedia articles (including the article images and facts) can be freely used under Attribution-ShareAlike license, unless stated otherwise. Cite this article:
Gamut Facts for Kids. Kiddle Encyclopedia.