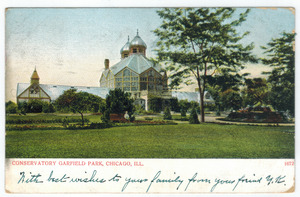 The first conservatory in Garfield Park

In the late 19th century, each of the three large West Side parks had its own small conservatory and propagation greenhouses. After 20 years of use, these conservatories had fallen into a state of disrepair and had become obsolete. 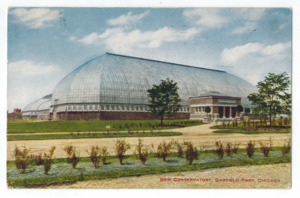 The 'new' conservatory, completed in 1907

In 1905, Chicago's West Park Commission's general superintendent and chief landscape architect, Jens Jensen, demolished the three smaller greenhouses in Humboldt, Douglass, and Garfield parks to create what was intended as "the largest publicly owned conservatory under one roof in the world" in Garfield Park. Many of the original plantings came from the three smaller Westside conservatories.

Constructed between 1906 and 1907, the Garfield Park Conservatory was designed by Jensen in collaboration with Prairie School architects Schmidt, Garden and Martin and the New York engineering firm of Hitchings and Company. It represents a unique collaboration of architects, engineers, landscape architects, sculptors, and artisans.

Jensen conceived the conservatory as a series of naturalistic landscapes under glass, a revolutionary idea at the time. The simple yet strong shape of the structure, which is meant to emulate the haystacks of the Midwest, complements the collection of plants and foliage that it houses. 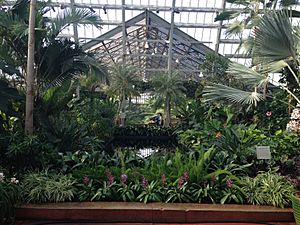 View of the Palm Room

Today, the conservatory still follows the original tenets of Jensen. One of the most popular rooms is the first presented to visitors, the Palm Room. In it are over 7 dozen varieties of palm trees of the over 2,700 varieties known to exist today. Of particular importance is the double coconut palm, first grown by employees of the conservatory in 1959. The double coconut palm is found only off the coast of South Africa in its native environment and produces what is believed to be the largest seed of any plant in the world, weighing up to 50 lb (23 kg). The double coconut palm at the conservatory died of currently unknown causes in February 2012. Because of the species' rarity in the wild, and the challenges of cultivation, it is not expected to be replaced.

After many decades of neglect, the conservatory underwent a multimillion-dollar restoration in 1994. The non-profit Garfield Park Conservatory Alliance formed to help maintain the structure and provide programs and services for visitors.

In a hailstorm on the night of June 30, 2011, the conservatory suffered catastrophic damage to glass in showrooms as well as production houses where plants are grown or stored. Five recently renovated showrooms contained laminated glass and therefore sustained less damage. Some areas reopened to the public July 3. The Fern Room reopened December 1, 2011, and the remaining areas opened January 24, 2012. To help raise money for the repairs local artist Bryan Northup created, and the Conservatory sold, limited-edition bowls out of the broken glass.

In 2012, the conservatory won the National Medal for Museum and Library Services.

The Garfield Park Conservatory is also known to be a place where people have illegally abandoned their pets, often lizard and other reptiles. Staff try to rescue them and are sometimes successful at capturing them and connecting them with local animal rescue groups, but oftentimes the animals end up dying of exposure or starvation according to staff.

In celebration of the 2018 Illinois Bicentennial, Garfield Park Conservatory was selected as one of the Illinois 200 Great Places by the American Institute of Architects Illinois component (AIA Illinois).

All content from Kiddle encyclopedia articles (including the article images and facts) can be freely used under Attribution-ShareAlike license, unless stated otherwise. Cite this article:
Garfield Park Conservatory Facts for Kids. Kiddle Encyclopedia.