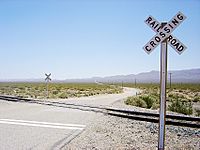 American crossbucks at the intersection of Redrock Randsburg Road and the Southern Pacific (now Union Pacific) Railroad, in the Mojave Desert near Garlock, California, May 2004

Garlock (formerly, Eugeneville) is an unincorporated community in Kern County, California. It is located 6.25 miles (10 km) east-southeast of Saltdale, at an elevation of 2169 feet (661 m).

Roberta Ruth lived in Garlock in the 1960s, managing a curio shop.

Garlock is a ghost town that was known as El Paso City or Cow Wells interchangeably. The little town provided water for cattlemen and freighters wishing to avoid the potentially treacherous washes in Red Rock Canyon. Some gold had been found in the canyons of the El Paso Mountains, enough to warrant an arrastra being built in 1887. In 1893 a nugget was brought in worth $1,900 from Goler Heights and so the rush began. In 1894 Eugene Garlock of Tehachapi moved in an eight stamp mill. Miners would talk of going down to "the Garlock mill," "down to the Garlock," and finally just "Garlock."

Three miles to the southwest was the site of Old Garlock.

All content from Kiddle encyclopedia articles (including the article images and facts) can be freely used under Attribution-ShareAlike license, unless stated otherwise. Cite this article:
Garlock, California Facts for Kids. Kiddle Encyclopedia.