Garrison is an unincorporated community in western Millard County, Utah, United States. It is home to a Utah Department of Transportation yard and office, but other than that, offers no services. 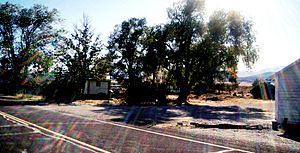 Garrison is located in Snake Valley in the far west central area of the state just east of the Nevada state line. In fact, some of the town's farms and structures are legally in Nevada. The Great Basin National Park is in Nevada just a few miles west of the border, accessed via Baker.

Founded as a cattle rustling and outlaw community in the 1850s, the town of Garrison later became the center of mining interests. The name comes from the Garrison family who farmed in the area. After mining interests subsided, the Garrisons had a livestock and hay ranch. Mrs. Garrison was a schoolteacher who also handled the mail, and the town's name honors her.

Garrison experiences a semi-arid climate with hot summers and cold winter. Due to Garrison's elevation and aridity, the Diurnal temperature variation is substantial.

All content from Kiddle encyclopedia articles (including the article images and facts) can be freely used under Attribution-ShareAlike license, unless stated otherwise. Cite this article:
Garrison, Utah Facts for Kids. Kiddle Encyclopedia.