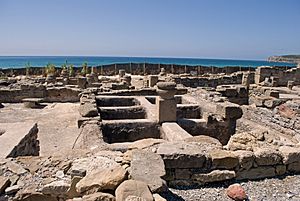 Garum was a fermented fish sauce used in ancient Greece, Rome, and Byzantium. It was made from the intestines of small fishes by bacterial fermentation.

While the finished product was apparently mild and subtle in flavor, the actual production of garum created such unpleasant smells that garum factories had to be placed in the outskirts of cities so that the neighbors would not be offended by the odor.

Today one can still see the ruins of the ancient garum factory at the site of Baelo Claudia, in Spain. This Spanish garum was a famous export to Rome, and gained the town a certain amount of prestige in its day. The garum of Lusitania (present-day Portugal) was equally highly prized in Rome. It was shipped to Rome directly from the harbour of Lacobriga (present-day Lagos).

Liquamen was a similar preparation, and at times they were synonymous.

All content from Kiddle encyclopedia articles (including the article images and facts) can be freely used under Attribution-ShareAlike license, unless stated otherwise. Cite this article:
Garum Facts for Kids. Kiddle Encyclopedia.