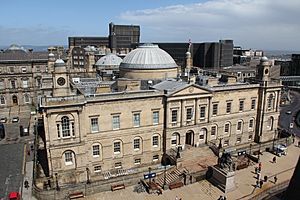 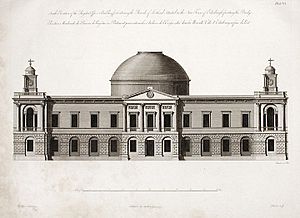 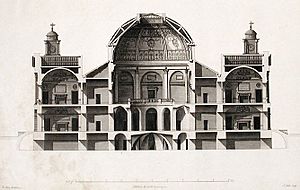 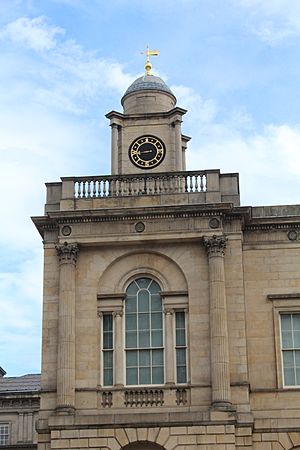 General Register House is an Adam style neoclassical building on Princes Street, Edinburgh, purpose built by Robert Adam between 1774 and 1788 as the headquarters of the National Archives of Scotland. It is a Category A listed building.

The building is a quadrangle in shape, built in ashlar of polished cream-coloured sandstone, with two storeys and a raised basement. The ground floor, and both storeys of the pavilions, are arcaded with timber-framed sash windows of twelve panes and decorated with a base course and an impost course. On the first floor storey is a cill course, a cornice, and a blocking course. The corners and the centre of each of the sides has a projecting taller pavilion consisting of one bay, with one window on each storey, with those at the building's corner topped with a square base supporting a cupola and freestanding columns at each angle. The corner towers at the front carry a weather vane and a clock; while the corresponding openings on the towers at the rear are blind. In the central courtyard is a circular reading room under a dome.

The front elevation consists of thirteen architectural bays, of which the outermost one at each end, ornamented by a balustrade, comprise the advanced pavilions at the corners. Each of the corner pavilions has on the upper storey a single Venetian window with Ionic columns in a recessed round arch and framed by Corinthian columns. The other windows on the upper storey are decorated with architraves and cornices, while those three that are above the central portico have balustrades and consoled cornices. Beneath the upper and lower storeys, the building is of rusticated ashlar to the ground level. The entrance, in the centre of the front, is approached by an imperial staircase and framed by a tetrastyle portico of the Corinthian order. Decorative panels in Liardet's stucco with festoon motifs decorate the wall above the portico, while the royal coat of arms of the United Kingdom decorates the pediment.

At the rear of the original building, the portico's place in the centre is taken by a five-bay centrepiece, with arcaded windows on the lower storey and corniced and pedimented windows alternating on the upper floor. The roof is of slate and of piended contraction, though the roof of the central dome is of lead. Inside, the dome was plastered by Thomas Clayton to neoclassical designs by Adam made in 1785. Robert Reid designed the metal gates that enter the rotunda under the dome. There are staircases in the east and west ends of the building, each now fitted with a lift shaft. The Lord Clerk Register's room is behind the entrance portico, adorned with a frieze and a chimneypiece in grey marble. Beyond the rotunda is "Historical Search Room", previously the "Antiquarian Room", a two-storey timber-galleried room of bookcases with a coffered ceiling with rosettes.

In 1969, the stonework was cleaned by abrasive blasting. The plasterwork in the dome was repainted in 1973/4. The entrance hall was restored and adapted in 1993, and a new chimneypiece installed.

All content from Kiddle encyclopedia articles (including the article images and facts) can be freely used under Attribution-ShareAlike license, unless stated otherwise. Cite this article:
General Register House Facts for Kids. Kiddle Encyclopedia.