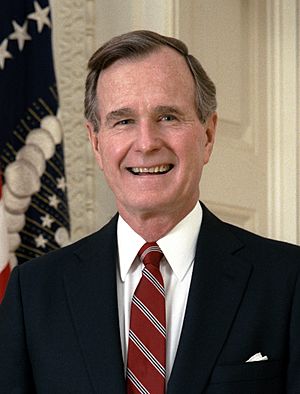 In 1990, President of the United States, George H. W. Bush, made a casual remark about broccoli (a vegetable), and said he would never eat it.

I do not like broccoli. And I haven't liked it since I was a little kid. And my mother made me eat it. And I'm President of the United States. And I'm not gonna eat any more broccoli!

The President made this comment in 1990, shortly after a journalist from the U.S. News and World Report broke the story that Bush banned the vegetable from Air Force One. George S. Dunlop, President of the United Fresh Fruit and Vegetable Association, gave First Lady Barbara Bush a bouquet of the vegetable an an additional 10 tons in trucks.

A few days afterwards, Bush hosted a state dinner to honour Tadeusz Mazowiecki, the Prime Minister of Poland, and journalists noted there was no broccoli on the menu, as most of the 10 tons of broccoli given to the President's family by the farmers had been donated to the Capital Area Food Bank.

All content from Kiddle encyclopedia articles (including the article images and facts) can be freely used under Attribution-ShareAlike license, unless stated otherwise. Cite this article:
George H. W. Bush and broccoli Facts for Kids. Kiddle Encyclopedia.