Get Fresh facts for kids

Kids Encyclopedia Facts
This page is about the TV show. For the Kid Sister song, see Get Fresh (song). For the Mel and Kim song, see Showing Out (Get Fresh at the Weekend).

Get Fresh is a children's television programme that ran from 1986 to 1988 in the United Kingdom. 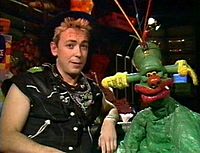 A Saturday-morning kids' TV show, broadcast on the Children's ITV network. The show featured Gareth Jones (aka Gaz Top), Charlotte Hindle, and, for the first year of its run, Gian Sammarco, the British child actor best known for his portrayal of the character 'Adrian Mole'. Sammarco was replaced for the 2nd and 3rd series by a puppet named Gilbert the Alien (voiced by Phil Cornwell).

Each week the series would be broadcast from a different UK location and centred on the Millennium Dustbin, a fictional space ship in which the presenters would travel the country. The show invited a live audience to attend and give vox-pop comments, to give presentations on local community activities, and to participate in games and challenges. Pop stars would also appear to perform on the show.

The weekly music strand of the show featured musical guest interviews and pop gossip. The segment was hosted each week by Nino Firetto and David 'Kid' Jensen.

The show featured a unique play-by-phone challenge, using the Amiga video game Xenon, where viewers would call in and shout "left, left, right, shoot" commands to a blindfolded player. Get Fresh also featured the animated series The Centurions and The Adventures of the Galaxy Rangers.

Get Fresh Sunday was a pre-recorded Sunday morning edition of the show also presented by Gaz, Charlotte and Gilbert. This spin-off featured The Adventures of Teddy Ruxpin and Gummi Bears and studio-based interviews and features, and was more item-based than the activity driven Saturday live show.

All content from Kiddle encyclopedia articles (including the article images and facts) can be freely used under Attribution-ShareAlike license, unless stated otherwise. Cite this article:
Get Fresh Facts for Kids. Kiddle Encyclopedia.