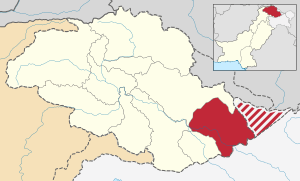 Ghanche District is the easternmost district of the Northern Areas, Pakistan. To its northeast is Xinjiang, China, to the north and northwest is Skardu District, to its west is Astore District and to its south is Leh District (Ladakh Division) in the Indian occupied territories of Jammu and Kashmir. The line of control along the eastern most region of Ghanche District cuts through the Siachen Glacier and is not permanent because of the conflict (It has been proposed by moderates in Pakistan and India to make the Siachen Glacier region a Peace Park).

The capital of Ghanche District is Khaplu. This is the coldest place within Pakistan also called the "Third Pole" with temperatures reaching below −20 °C (−4 °F) in the winter. Khaplu and Hushe valleys form the gateway for the great Baltoro Muztagh, the subrange of Karakoram that includes the mighty peaks of K2 (8,611 m), Broad Peak (8,047 m), Gasherbrums (8,000+ m) and Masherbrum (7,821 m) (all of which are included in the Skardu District).

All content from Kiddle encyclopedia articles (including the article images and facts) can be freely used under Attribution-ShareAlike license, unless stated otherwise. Cite this article:
Ghanche District Facts for Kids. Kiddle Encyclopedia.