Gigantopithecus was the largest primate that during from the Pleistocene Era (1.8 million to 10,000 years ago) large mammals ruled the Earth. Gigantopithecus is known to have lived in what is now China and Southeast Asia. He would have risen 10 feet high if he choose to stand up on only his hind legs, and probably weighed about 1200 lbs. In comparison, the largest gorilla stands only 6 feet tall and weighs about 300 to 400 lbs. 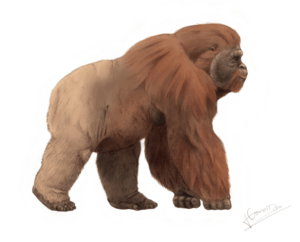 Gigantopithecus's method of locomotion is uncertain, as no pelvic or leg bones have been found. The dominant view is that it walked on all fours like modern gorillas and chimpanzees; however, a minority opinion favors bipedal locomotion. This was most notably championed by the late Grover Krantz, but this assumption is based only on the very few jawbone remains found, all of which are U-shaped and widen towards the rear. This allows room for the windpipe to be within the jaw, allowing the skull to sit squarely on a fully erect spine as in modern humans, rather than roughly in front of it, as in the other great apes.

The majority view is that the weight of such a large, heavy animal would put enormous stress on the creature's legs, ankles, and feet if it walked bipedally; while if it walked on all four limbs, like gorillas, its weight would be better distributed over each limb. 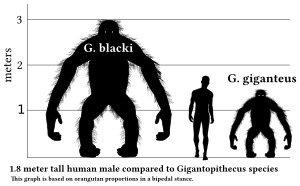 A comparison graph of a 1.8-meter-tall human male (almost 5' 11") in comparison to G. blacki (left) and G. giganteus (right): This graph is based on orangutan proportions while standing upright.

Based on the fossil evidence, adult male Gigantopithecus blacki are believed to have stood about 3 m (9.8 ft) tall and weighed as much as 540–600 kg (1,190–1,320 lb), with the largest males possibly reaching 900 kg (1,980 lb) , making the species three to four times as heavy as modern gorillas and seven to eight times as heavy as the orangutan, its closest living relative. Large males may have had an armspan of over 3.6 m (11.8 ft). The species was highly sexually dimorphic, with adult females roughly half the weight of males. Because of wide interspecies differences in the relationship between tooth and body size, some argue that it is more likely that adult male Gigantopithecus blacki were much smaller, at roughly 1.8–2 m (5.9–6.6 ft) in height and 180–300 kg (400–660 lb) in weight.

Its appearance is not known, because of the fragmentary nature of its fossil remains. It possibly resembled modern gorillas, because of its supposedly similar lifestyle. Some scientists, however, think it probably looked more like its closest modern relative, the orangutan. Based on the upper estimates, Gigantopithecus possibly had few or no enemies when fully grown. However, younger, weak, or injured individuals may have been vulnerable to predation by big cats, large constrictor snakes, crocodiles, machairodonts, hyenas, and Homo erectus. Based on the lower estimates, however, even fully grown individuals may have been vulnerable to predation by all the animals mentioned above other than large snakes.

The genus lived in Asia and probably inhabited bamboo forests, since its fossils are often found alongside those of extinct ancestors of the giant panda. Most evidence points to Gigantopithecus being a herbivore. 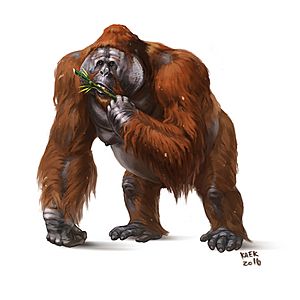 The jaws of Gigantopithecus are deep and very thick. The molars are low-crowned and flat, and exhibit heavy enamel suitable for tough grinding. The premolars are broad and flat and configured similarly to the molars. The canine teeth are neither pointed nor sharp, while the incisors are small, peglike, and closely aligned. The features of teeth and jaws suggested that the animal was adapted to chewing tough, fibrous food by cutting, crushing, and grinding it. Gigantopithecus teeth also have a large number of cavities, similar to those found in giant pandas, whose diet, which includes a large amount of bamboo, may be similar to that of Gigantopithecus.

In addition to bamboo, Gigantopithecus consumed other vegetable foods, as suggested by the analysis of the phytoliths adhering to its teeth. An examination of the microscopic scratches and gritty plant remains embedded in Gigantopithecus teeth suggests that they fed on seeds and fruit, as well as bamboo.

Gigantopithecus may have become extinct approximately 100,000 years ago because the climate change during the Pleistocene era changed the plants from forest to savanna, and the food supply, fruits, decreased. Gigantopithecus did not eat the grass, roots and leaves that were dominant food sources in the savanna.

All content from Kiddle encyclopedia articles (including the article images and facts) can be freely used under Attribution-ShareAlike license, unless stated otherwise. Cite this article:
Gigantopithecus Facts for Kids. Kiddle Encyclopedia.