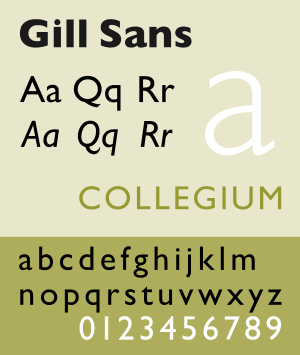 Gill Sans is a sans-serif typeface designed by Eric Gill. It was offered by the British branch of Monotype from 1928 onwards.

Gill Sans is based on Edward Johnston's 1916 "Underground Alphabet", the corporate font of London Underground. As a young artist Gill had assisted Johnston in its early development stages.

In the 1920s, Gill had become a prominent stonemason, artist and creator of lettering. He had begun to working on typeface designs. Gill was commissioned to develop his alphabet into a full metal type family by his friend Stanley Morison. Morison was a Monotype executive and a historian of printing. Morison hoped the new font would compete against a wave of German sans-serif families such as Futura.

Gill Sans was released in 1928 by Monotype. Gill's aim was to blend the influences of Johnston, classic serif typefaces and Roman inscriptions suchas on Trajan's Column. This, he hoped, would create a design that looked both cleanly modern and classical at the same time.

All content from Kiddle encyclopedia articles (including the article images and facts) can be freely used under Attribution-ShareAlike license, unless stated otherwise. Cite this article:
Gill Sans Facts for Kids. Kiddle Encyclopedia.