Giora Feidman was born in Buenos Aires, Argentina. His Bessarabian Jewish parents immigrated there to escape persecution. Feidman's family are klezmer musicians. His father, grandfather and great-grandfather made music for weddings, Bar Mitzvahs, and holiday celebrations in the shtetls (villages) of Eastern Europe. Feidman married Ora Bat-Chaim in 1975. She was his personal manager. 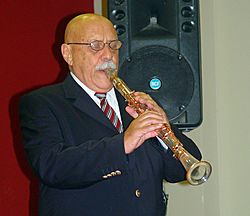 Feidman started his career in Buenos Aires, where he was a member of the Teatro Colón Symphony Orchestra. Two years later he immigrated to Israel. He became the youngest clarinetist ever to play with the Israel Philharmonic Orchestra. He was a member of the orchestra for over 20 years. In the early 1970s he started a solo career. He has performed with the Berliner Symphoniker, the Kronos Quartet, the Polish Chamber Philarmonic, the Munich Chamber Philarmonic Orchestra, and the Munich Radio Orchestra.

Feidman started the "Clarinet and Klezmer in the Galilee" seminar and master class program, which takes place every year in Safed, Israel.

All content from Kiddle encyclopedia articles (including the article images and facts) can be freely used under Attribution-ShareAlike license, unless stated otherwise. Cite this article:
Giora Feidman Facts for Kids. Kiddle Encyclopedia.