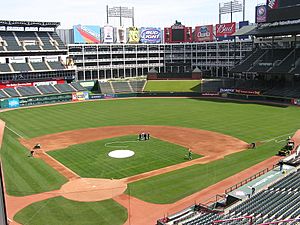 Globe Life Park in Arlington is a stadium in Arlington, Texas. From its opening in 1994 until 2019, it was a baseball park that was home to the of the Major League Baseball team called the Texas Rangers. The ballpark replaced the old home of the Rangers, Arlington Stadium. It closed as a baseball park in October 2019, after which the Rangers moved across the street to a retractable-roof stadium, Globe Life Field.

After the Rangers moved out, the stadium was rebuilt for football and soccer, and soon gained new tenants in both sports. In football, the Dallas Renegades, a team in the revival of the XFL, started play there when the league started February 2020. In soccer, North Texas SC, a team that plays in the third level of U.S. soccer, USL League One, will start play at Globe Life Park in March 2020. The latter team, the reserve team of Major League Soccer's FC Dallas, had played its first season of 2019 at FC Dallas' home of Toyota Stadium in another Dallas–Fort Worth suburb, Frisco.

All content from Kiddle encyclopedia articles (including the article images and facts) can be freely used under Attribution-ShareAlike license, unless stated otherwise. Cite this article:
Globe Life Park in Arlington Facts for Kids. Kiddle Encyclopedia.