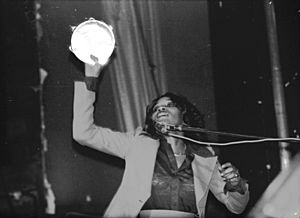 This is Gloria Jones performing in March 1976

Gloria Jones (born October 19, 1945) is an American singer and songwriter. She recorded the 1965 song "Tainted Love". She also had other songs.

On September 16, 1977, Jones was driving a car. Marc Bolan of the group T. Rex was a passenger. The car crashed and killed Bolan.

Jones was born in Cincinnati, Ohio. She later moved to Los Angeles, California.

All content from Kiddle encyclopedia articles (including the article images and facts) can be freely used under Attribution-ShareAlike license, unless stated otherwise. Cite this article:
Gloria Jones Facts for Kids. Kiddle Encyclopedia.