God's Bridge is a Site of Special Scientific Interest in the Teesdale district of south-west County Durham, England. It is a natural limestone bridge over the River Greta, just over 3 km upstream from the village of Bowes.

The bridge was formed by a process of cave development in the limestone beneath the river bed and is the best example in Britain of a natural bridge formed in this way. The SSSI covers a portion of the river above and below the bridge where shallow cave development by solutional activity is still taking place.

The Pennine Way crosses the River Greta at God's Bridge. 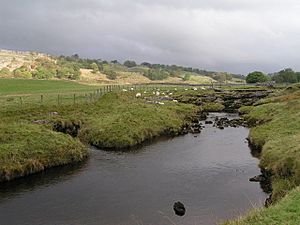 A similar formation on the River Doe near Chapel-le-Dale in the Yorkshire Dales has the same name.

All content from Kiddle encyclopedia articles (including the article images and facts) can be freely used under Attribution-ShareAlike license, unless stated otherwise. Cite this article:
God's Bridge Facts for Kids. Kiddle Encyclopedia.