Kids Encyclopedia Facts
This page is about the ghost town. For the national monument, see Gold Butte National Monument. 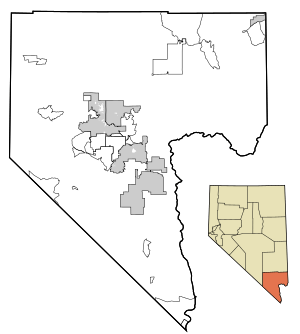 Gold Butte is the name of a ghost town and nearby mountain peak in Clark County, Nevada. Both are protected as part of the Gold Butte National Monument, managed by the Bureau of Land Management. Gold Butte, the mountain, is 5,013 feet (1,528 m) high and rises 1,280 feet (390 m) above the town of Gold Butte. This peak lies within the Virgin Mountains and its name apparently refers to the Gold Butte Mining District.

Gold Butte, Nevada is also a ghost town located in Clark County, Nevada that was established in 1908 when gold was discovered in the area. Mining was active from about 1905 through 1910. Little remains at the site: a couple of foundations, two graves, and several old mine shafts. The BLM's Jumbo Springs Wilderness is south of the Gold Butte townsite.

The Gold Butte Mining District includes the territory south of Gold Butte lying between the Nevada-Arizona state line to the east and the Virgin River (now Lake Mead) to the west. Mining began in the 1880s. The total production from the district has been about $75,000. There has been prospecting and small-scale mining for gold, mica, magnesite, copper and zinc. No significant deposits were found.

The Bundy standoff, which pertains in part to the Gold Butte area, was caused in spring 2014 as the result of a 20-year-old land use disagreement between the Bureau of Land Management and Cliven Bundy, a local rancher.

All content from Kiddle encyclopedia articles (including the article images and facts) can be freely used under Attribution-ShareAlike license, unless stated otherwise. Cite this article:
Gold Butte, Nevada Facts for Kids. Kiddle Encyclopedia.