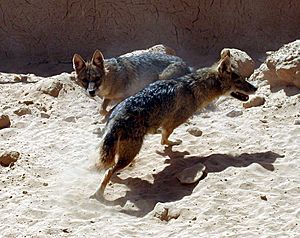 The golden jackal (Canis aureus) is a wolf-like canid that is native to Southeast Europe, Southwest Asia, South Asia, and regions of Southeast Asia. Compared with the Arabian wolf, which is the smallest of the gray wolves, the jackal is smaller and possesses shorter legs, a shorter tail, a more elongated torso, a less-prominent forehead, and a narrower and more pointed muzzle.

The golden jackal's coat can vary in color from a pale creamy yellow in summer to a dark tawny beige in winter. It is listed as Least Concern on the IUCN Red List due to its widespread distribution and high density in areas with plenty of available food and optimum shelter.

The ancestor of the golden jackal is believed to be the extinct Arno river dog that lived in Mediterranean Europe 1.9 million years ago.

Golden jackals are abundant in valleys and beside rivers and their tributaries, canals, lakes, and seashores. They are rare in foothills and low mountains. The golden jackal is a social species, the basic social unit of which consists of a breeding pair and any young offspring. It is very adaptable, with the ability to exploit food ranging from fruit and insects to small ungulates. They will attack domestic fowl and domestic mammals up to the size of domestic water buffalo calves. The jackal's competitors are the red fox, wolf, jungle cat, forest wildcat, and, in the Caucasus, the raccoon, and, in Central Asia, the steppe wildcat. The jackal is expanding beyond its native grounds in Southeast Europe into Central Europe, occupying areas where there are few or no wolves.

The golden jackal is both a predator and a scavenger. In Bharatpur, India, over 60% of its diet was measured to consist of rodents, birds, and fruit. In the Kanha Tiger Reserve, 80% of its diet consists of rodents, reptiles and fruit. Vegetable matter forms part of the jackal diet, and in India they feed intensively on the fruits of buckthorn, dogbane, Java plum, and the pods of mesquite and the golden rain tree. The jackal will scavenge off the kills made by the lion, tiger, leopard, dhole, and gray wolf. In some regions of Bangladesh and India, jackals subsist by scavenging on carrion and garbage, and will cache extra food by burying it.

All content from Kiddle encyclopedia articles (including the article images and facts) can be freely used under Attribution-ShareAlike license, unless stated otherwise. Cite this article:
Golden Jackal Facts for Kids. Kiddle Encyclopedia.