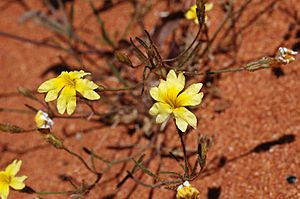 Goodenia berardiana is a species of flowering plant in the family Goodeniaceae and is endemic to Australia. It is an erect, widely distributed and variable annual herb with linear to egg-shaped, sometimes lobed or toothed leaves, and yellow flowers arranged in leafy racemes or few-flowered umbels.

Goodenia berardiana grows in a variety of habitats, often in sandy, stony or gravelly soils, or on mulga-dominated plains. It occurs in drier parts of southern and western Western Australia, South Australia, southern Northern Territory and the far west of New South Wales.

All content from Kiddle encyclopedia articles (including the article images and facts) can be freely used under Attribution-ShareAlike license, unless stated otherwise. Cite this article:
Goodenia berardiana Facts for Kids. Kiddle Encyclopedia.