Government of Nevada facts for kids

The Governor of Nevada and their cabinet, along with the other elected constitutional officers, constitute the executive branch. 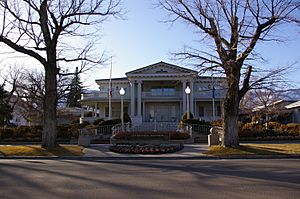 The Governor's Mansion in Carson City

The Governor of Nevada is the chief magistrate of Nevada, the head of the executive department of the state's government, and the commander-in-chief of the state's military forces. The governor has a duty to enforce state laws, and the power to either approve or veto bills passed by the Nevada Legislature, to convene the legislature at any time, and, except in cases of treason or impeachment, to grant pardons and reprieves.

The governor has a four-year term. To be elected governor, a person must be at least 25 years old, and must have been a citizen of Nevada for at least two years, at the time of election. The Lieutenant Governor of Nevada is not elected on the same ticket as the governor.

The Governor's cabinet is composed of the heads of the several state agencies of Nevada:

All content from Kiddle encyclopedia articles (including the article images and facts) can be freely used under Attribution-ShareAlike license, unless stated otherwise. Cite this article:
Government of Nevada Facts for Kids. Kiddle Encyclopedia.